I thought it may be interesting to take a quick tour of some of the free jazz releases that have come this way over the past couple months. The following is in no way an exhaustive list, just a sampling of some of the great music out there that has caught my ear recently.
Stanislav Bobrytskyy, Andy Gone - Live at Babuin (self released, 2012) **** 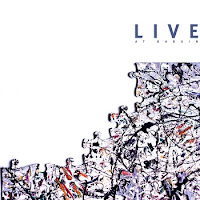 We start in Kiev with keyboardist Stanislav Bobrytskyy and percussionist Andy Gone's high energy performance at what sounds to be an intimate venue (some clinking glasses and ambient chatter can be detected in the recording). Bobrytskyy is a dynamic and energetic keyboardist who plays with a real vibrancy and urgency. Gone's drumming is a perfect compliment to the colorful and percussive leanings of Bobrytskyy, and together they have a sound that is immediate and melodic. The opening 'Polymer' showcases engaging syncopations and an ever evolving melody. The dramatic penultimate 'Puzzle One' was quite a pleasant surprise. The closing tunes feature Bobrytskyy using a sound and approach that would not have been out of place on a Soft Machine recording circa 1970. These are two musicians I hope to hear more of in the future. 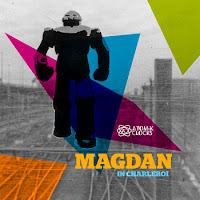 We travel westward now to Florence where Atomik Clocks are lighting their home studio on fire with thier kinetic energy. They are a jazz-punk group that plays with some fire and reminded me of an only slightly tempered Acoustic Ladyland. With a similar instrumentation to the 1970's group Back Door, Atomik Clocks follows suit a bit with Francesco Li Puma's electric bass featured prominently, leading the trio through some powerful and complex grooves. Filippo Pratesi lets loose a stream of ideas on sax that fit tightly with Marco Ruggiero's drumming. A highlight here is the track 'Le stagione deli amori' which features some nice trio interplay and allows Pratesi to break out a bit, extending his range and melodic approach. Though I did feel that there could be a little more variation to the songs, overall it's an energetic and exciting recording. 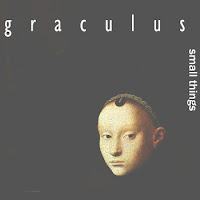 Heading north to Liverpool, we find the duo of Graculus making some very gracious and enjoyable improvised music. The group is Richard Harding on classical guitar and Phil Hargreaves on flute and soprano sax, and their approach is as sensitive and light as the previous group is hard charging. During this collection of 34 short improvisations (longest is 2:23, shortest :46), Harding's guitar provides minimalistic but highly effective support to Hargreaves' melodic woodwind lines. The text that the group uses is aptly descriptive: An album of improvised miniatures, using classical guitar and either flute or soprano sax. This (mostly) quiet album is really quite enjoyable, give it a listen. 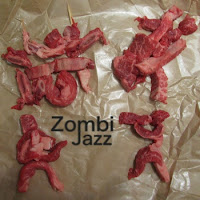 Across the Atlantic, Zombi Jazz from Brooklyn, NY is creating an undead mix of mangled and bloody improvised free jazz. This group is Michael Foster on sax and clarinet, Alex Hood on trumpet, trombone and vocals, Eric Silberberg on bass and violin, and Dan Stern on drums and marimba. I'll admit, it took me a bit to get into this one. The vocalizations on the first tune, and peppered throughout, didn't work for me at first, but I accepted it as a part of the whole package, and it was more than offset with the fantastic meat art on the album cover. Also, I was quite taken with the version of Monk's Evidence. It's a journey through ambient radio sounds, multiple voices playing concurrent solos, extended technique and some snippets of the underlying melody surfacing on occasion. The level of individual musicianship is high and the group dynamic is strong, especially on songs like 'Into Prostitution' and 'Jermiah Jizzbo'. It's not easy music, but it draws you in, and once you're bit, it can be infectious.