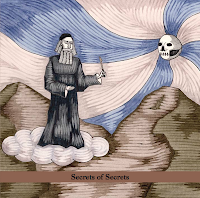 It's about half way into the first song 'Secrets of Creation (khoisdl)' on Aaron Novik's Secret of Secrets and after a long classically influenced passage, the strings have interlocked with the keyboards in a dark and moving groove that makes me feel like I'm discovering an unknown chamber in my soul. The sounds takes on an earthy hue and I can feel my heart being pulled from my corporeal being as the strings draw the song up to a tight finish.

Now prepared, I embrace the powerful entrance to 'The Divine World (terkish)'. The persistent and powerful rock like intro is a multi- layered affair with a klezmer melody atop a weighty rhythm played by the strings. The guitar contributes a swirling line over the dark and churning tempest below, until the strings soon help usher in the next movement and lighten the whole affair with a folk tinged melody.

Besides the strong musicianship and intriguing song development, there is a third element to the album, which is its inspiration. The album is built around mysticism and reference to 12th century Kabbalistic writings (for a more in depth explanation I refer you to Eyal Hareuveni's excellent review). Suffice to say, I am simply listening to this dark and stirring album as just that, a dark, stirring and electrically charged album, though I'm sure an understanding of its roots and inspiration could shine in some light while deepening other shadows.

A fantastic work that draws on elements of classical, jazz, rock and electronics to great effect. Certainly worth checking out!

Check out an excerpt here: