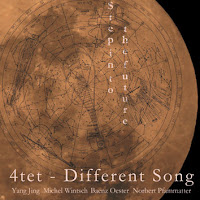 
The great thing about jazz is its inherent openness to new possibilities, including the inclusion of non-Western instruments, harmonies and scales. The toughest part of doing this well is to ensure that both traditions keep their identity while adding a new musical experience on top. This great album is a prime example of this.

Swiss musicians Michel Wintsch on piano, Bänz Oester on bass and Norbert Pfammatter on drums welcome Chinese pipa-player Yang Jing in their midst for a fascinating journey of calm and cautious improvisations.

I am not quite sure what kind of arrangements were made among the musicians, but the interplay has this relaxed sense of respect, ensuring that sounds get created by a few musicians for the others to join and expand. There is no rush and no hurry, yet the music is very intense.

If the pipa may sound like an instrument from a different culture, Wintsch, Oester and Pfammatter also make sure that their traditional instruments get the occasional extended sound too, leading at times to an interesting clash of unknown knowns.

Part of the tracks are composed, and while they are easier to remember, especially the short "Les Mots Lisses", it is in the improvisations that the real value of the interaction becomes evident, with a somewhat darker and sadder atmosphere emerging, as on the partly composed "QinXu Street No 48", but especially on the suite "Steps Into The Future". The album ends with "Water Lilly" a typical Wintsch theme evolving in a circular way, full of romanticism, but then with skills and character.