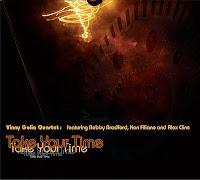 After yesterday's review, here is another great quartet, with Vinny Golia on saxophones, Bobby Bradford on cornet, Ken Filiano on bass and Alex Cline on drums. As I might have written once, Golia is one of those musicians whose playing really opened my ears many years ago, because of his power to be lyrical and emotional while at the same time trying out new things. So I always look out with anticipation for his new projects.

Like good wine, this music also has body and substance, while being fluid. All tracks have composed elements without having real themes, but offer structured character as the basis for the band's interaction. Another characteristic is that all four musicians play all the time, with only few exceptions. This adds to the density of the sound and the intensity of the music, which spans the whole range from bop to free jazz. 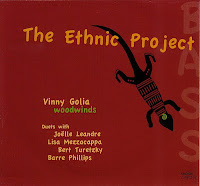 On this album Vinny Golia plays all kinds of ethnic instruments, each time in a duet with some of the world's best free improvisation bassists : Barre Phillips, Joëlle Léandre, Bert Turetzky and Lisa Mezzacappa.

It all sounds very exotic - as is the intention - but also familiar as it is free improvisation after all, with limited real ethnic musical influence apart from the instruments.

It is lighfooted, fun and easy to digest. Music by friends. Music of the world ... and for friends all over the world. Warm and full of character. Peace.