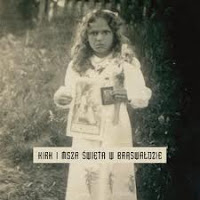 First things first for all (myself included) who don't speak, or read, Polish - Msza Święta w Brąswałdzie = Holy Mass in the City of Brąswałd.


I always enjoying reviewing electronica albums, or anything that comes from that left field musical area. There's something fresh about hearing clear 0s and 1s coming through your speakers. This is an album for all those who enjoy trance (like) music encompassing jazz, techno and I suppose also a (sort of) ethnic feel. kIRK is a Polish collective made up of Paweł Bartnik (electronic instruments), Olgierd Dokalski (trumpet) and Filip Kalinowski (turntables) who clearly enjoy the art of mixing up various components. In their PR blurb they talk about Mary Anne Hobbs, techno and Si Begg, but to me this is actually (even if they didn't know) a more recent version of 23 Skidoo and Rip, Rig and Panic, two bands that if you don't know them .... you should!

To a certain extent kIRK comes directly from the same industrial wasteland as those two aforementioned bands. The music conjures up those same industrial soundscapes, something that many people can relate to at the present. The music is dark and minimal using the trumpet as a sort of melodic foil for the hard hitting percussive sounds coming from the two 'sound men'. From what I read the music is improvised, built from simple structures. You can certainly hear all this in the record as the music's minimal aspect hits you straight from the start. The title track is a repeated note played in a strong heavy repetitive rhythm that is neither a guitar, nor a drum, nor electronic beat, but something in-between. The music washes over you, not as dance music, but comes at you as a sort of unstoppable robotic beat, slow but never wavering full of trumpet flourishes that swirl within the sound.

Unfortunately as my Polish isn't up to much I can't tell you what the titles say but the five tracks on this LP all work more or less on the same system, not a criticism as it works very well. One hears turntable scratching and drum beats mixed with voices (in the machine), keyboard flourishes and other processed sounds providing the backdrop for the trumpeter Olgierd Dokalski blows over these rhythms spattering phrases here and there. There are no developed melodies, however Tk 2 has a vague klezmer quote (from a piece whose name escapes me at the present).

This album will certainly be of interest to those who like a more post modern approach to popular music and rhythms but still have some connection with the world of jazz, electro-acoustics and improvisation. In a way creeping into these sonic landscapes is like listening to a sort of industrial Sketches of Spain.