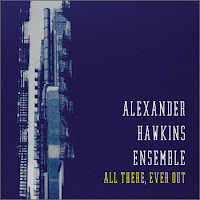 
More original music from the UK, and a very nice one too! The young generation of UK jazzers keep on producing refreshing new music that respects the previous generation and yet builds on newer concepts. Along with the Polish scene (a little more dark in concept) the UK seems to be capable of turning out music which is truly 'genre bending' and at the same time be also accessible. When I talk about 'these' groups I think of the new generations involved with the Loop Collective, F-Ire, the LIMA and several others on the UK scene. The music that is being produced seems to be happily embraced by the younger generation of jazz lovers, meaning that the contemporary music and free-improvisation scene stays healthy and vibrant.

Alexander Hawkins' new offering, the second I think, with his ensemble consisting of Orphy Robinson (vibes/marimba), Otto Fischer (guitar), Hannah Marshall (cello), Dominic Lash (bass), and Javier Carmona (drums) is one of these wonderful such groups. A group that produces a music that is looking for new ways to play old forms, but that in no way compromises itself (not unlike that of Taylor Ho Bynum). To a certain extent it kind of reminds me of modern day Andrew Hill way of thinking and composing. The compositions are wonderful pieces full of melody with interesting rhythmic twists and turns. Solos glide in and out of the music so naturally, giving the listener a view into the music which needs no concentration. You'll find yourself magically transported into the piece as if on a magic carpet ride. Tatum Totem III (Tk 2) rattles away like a train out of control, but who cares it's such fun to listen to. Ologbo (Double Trio) (Tk 1) is a wonderful guitar piano melody that is so awkward it has to be heard and at the same time it has a naive beauty which is perfectly balanced. The use of Orphy Robinson's marimba work is a master-stroke in this context, giving the music a wonderful combination of rhythm and melody, his solo features throughout are a highlight every time. But then again so is everyone. Cellist Hannah Marshall plays some excellent lines and solos on this record. One such moment is a fantastic duet between Dominic Lash and Ms Marshall on (Tk3) 'Owl (Friendly)/A Star Explodes 10,000 Years Ago, Seen By Chinese Astronomers' ... great title, wonderful duet! In fact it's difficult to decide what to write about on this album as there's so much to look at (I mean listen to). Ahab (Tk5) is like Beefheart meets Dolphy meets Hill meets Monk, quite a combination I suggest (?), and which also gives plenty of room to Hawkins himself to stretch out over a fine bucking bronco rhythm section.

Throughout the record there is a excellent balance of improvised music, composition and even humour (I suppose) as the melodies are what could be called 'playful', all are played with energy and precision. The final track 'So Very, Know' is a stark contrast to the rest of the album with an eerie Hammond organ that finally makes way for the atmospheric guitar of Otto Fischer who gently places chords giving the piece some still movement. In fact it's not unlike standing on a beach at night looking out into the darkness at the sea wondering 'I wonder what's out there'?