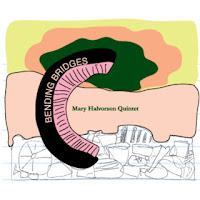 Guitarist Mary Halvorson has appeared in several recent posts on this blog and much has been written about the fresh and exciting perspective she is bringing to the guitar, however, most of the recordings documented here are projects outside her explicit leadership. While all are excellent recordings, this latest one, 'Bending Bridges' recorded with her quintet, is an exciting documentation of her evolving style and group's playing.

I had a preview peak at the charts for some of the songs when I arrived a little too late at The Stone last fall and ended up sitting behind the musicians and had a clear view of their music stands. Dense thickets of notation, like rorschach test from my vantage point, spread out across endlessly accordioning pages. I was as mystified by the charts as much as I was by the brilliant playing.

It's quite satisfying to hear the music that was captured for this album. The guitar is at the center of 'Bending Bridges' and its sounds and shapes are reflected in the compositions. It is an exciting set of songs that pack a lot of changes, textures, styles and space into their fairly complex arrangements and where careful consideration and space is thoughtfully given to all the musicians.

From the opening moments, there is gravitas to "Sinks When She Rounds The Bend (No. 22)". The guitar holds unusually voiced chords while the double horn line up of trumpeter Jonathan Finlayson and Saxophonist Irabagon play a slow moving melody, creating an effect like chords moving in counterpoint. Halvorson then uses single note lines, with some unexpected intervals, to bridge between quick melodies from the horns. Bassist John Hebert has an extensive solo and his interactions with drummer Ches Smith's ambient textures makes for quite a happy earful.
The next tune, 'Hemorrhaging Smiles (No. 25)', is a fascinating track. From the somewhat jaunty rhythm, to the excellent solos from the horns, to the plaintive melody riding over the guitar solo, the song evolves into a distortion laden rocking affair and down in the muck free jazz exploration. The seamless blend between the free playing and composed sections seems to showcase the versatility of group and Halvorson's confident compositional skills.

Another song, 'The Periphery Of Scandal (No. 23)', has Halvorson leading off with an uptempo and sinewy melody. Recorded with the core trio of guitar, bass and drums (the quintet plays on just over half of the tunes) it becomes obvious that foundation created by the three allows the full quintet to be the 'icing on the cake'. It's great to hear Smith's tumbling solo and the connection that the trio has, and when Halvorson hits the distortion, the effects are devastatingly sublime.

I could go on and on, but it's suffice to say that this is a highly creative and compelling set of songs that begs for repeat and close listens. For me, each time I hear it, a new layer of sound peels away and presents itself. I may be going out on a limb here but there is a kinship to Tomas Fujiwara & the Hook Up's 'The Air is Different' released last week and even the recording from Aych released a few months ago. Not just because Finlayson is a member of the Hook Up and Halvorson is a member of both, but rather in something found in the approach and spirit of the work. Perhaps it's just the proximity of their releases, but the blend of freedom and composition and the bricolage of seemingly opposed styles being melded with growing sophistication seems to be part of a journey to something new and exciting.