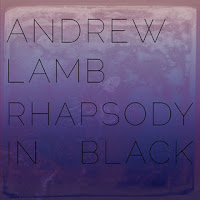 
It sounds as if Andrew Lamb read my review of his previous album "The Hues Of Destiny" which was nice enough, but never really meant to make a statement. And he does on this fantastic record. He plays saxophone, flute, clarinet and conch shell, Tom Abbs plays bass, tuba and didjeridoo, and with Michael Wimberly and Guillermo E. Brown playing drums and percussion.

On "Rhapsody In Black", Lamb make a perfect mix between indigenous African music, post-bop and free jazz, and as its title suggests, an ode to black music in its entirety. The album starts with "Initiation", a hypnotic and slow piece with lots of open textures, yet with the same tension as on Jarrett's "Survivors' Suite", with percussion and bass leading the yearning dance of the sax.

The title track is again rhythm section driven, with Lamb's tenor soaring in a more uptempo way, with Abbs blowing dark toned voices out of his tuba, and even if the music looses a little bit of momentum halfway, the free improvisation moves over some military sounds to a beautiful repetitive phrase, supported by Abbs' arco playing, and the transition works perfectly.

I am usually not a fan of flute music, but Lamb's intro is quite compelling on the long  "To Love In The Rain (Portrait Of A Virtuous Woman), including some Middle-Eastern tone flexions, over a great rhythmic base, and  the conch shell sound adds a remarkable mystic depth to the piece.

The album ends with "Song Of The Miracle Lives", starting with expansive sax playing in the best free tradition, both lament and invocation, a fragile solo full of emotion and spirituality, with bowed cymbal sounds in the background offering great effects of space, and as the bass and the drums start adding pulse, so does the sax, with a repetitive rhythmic phrase, first bluesy, then playing for the stars and the universe, accompanied by enthusiastic shouts and rhythmic mayhem, yet it remains within boundaries, respectful, contained, subdued, never violent or antagonistic, but creative and fresh and sweeping.

If you really want to hear soul and spirituality and human warmth, you should listen to this album. This band masters the magic of music. An album to listen to many many times.