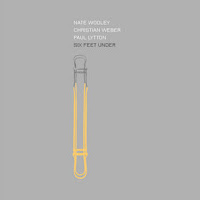 “Playing in a trio is very tricky for me, honestly.” In a 2009 interview for Bagetellen, trumpeter Nate Wooley describes struggling with the trio dynamic, often feeling as though someone must end up the “wild card,” running the risk of jutting awkwardly into the musical conversation. But he also goes on to describe trios in which he’s forged singular connections, groups that have settled into unspoken modes of operation that elevate all the musicians involved.

Six Feet Under, released as a very limited LP by NoBusiness Records, was recorded a few months after that interview. Opener “Pushing Up Daisies” starts quite immediately with Wooley’s quiet, bubbling lines and the gentle scraping of bassist Christian Weber. It soon establishes the dynamic that prevails throughout the record: an almost symbiotic pairing of Wooley and Weber, supplemented subtly by Paul Lytton’s clattery percussion. Often, the bass and trumpet meld into textured drones that may as well be a single sound, with Wooley’s long, scratchy tones dissolving into the arco bass. Weber is a particularly attentive improviser: he listens closely to Wooley’s phrasings and changes in timbre, often matching or highlighting them with a speed and clarity that reminds me of the great sax-player John Butcher.

The black theme running through the song titles is fitting. The atmosphere is occult and abstract, especially in the quieter moments. “Moribund” drags itself along, beginning almost out of earshot—you find yourself holding your breath, trying to pick up on Lytton’s faint rattles and thumps. Close listening suddenly feels like eavesdropping. The patches of alien noise that erupt in “La Grande Morte” sound like attempts to conjure something dark and Lovecraftian. At times, it’s not at all clear who’s doing what, only that they must have some secret understanding of the terrain they’re investigating. Even at its loudest, there’s a measured quality to the music, an intuitive sense of direction that’s shared by all.

Final track “Check Out Time (The End)” closes with Wooley and Lytton sputtering out static, like a radio transmission that’s being lost. It funnels down into a sole, reedy note held on the trumpet, then expires with a click. It’s a perfect ending, and once again affirms that—despite his reservations—Wooley’s not only survived a trio encounter, he’s absolutely nailed it.