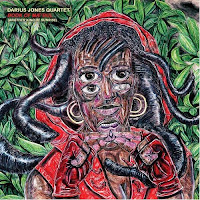 I had a dream about Darius Jones last night after listening to Book of Mae'bul. He was playing in a small club and I was the only person in the audience. When his set finished I approached him with a question. It was to help me write this review. He opened his mouth and I could hear the record, note for note, coming from inside of him, somewhere very deep.

A clear statement, on this, the third installment of his Man'ish Boy series, was to switch up the rhythm section again by adding Trevor Dunn (bass) and Ches Smith (bass) who dynamically aid in Jones' maturation of themes from Big Gurl (Smell My Dream).

Another is the addition of Matt Mitchell on piano, turning Jones' previous trio relationships up a notch. This decision pays dividends multiple times throughout. For example letting him be the first thing you hear. A wonderful introduction indeed. That, however, isn't the only excitement on The Enjoli Moon, the album's opening track. Mitchell also gets the first solo as Dunn and Smith propel the tempo as if they were warning us about something. An ear full of a track indeed full of push and pull, abandonment and restraint.

The track Be Patient With Me starts with a gut wrenching plea for salvation, forgiveness, and of course, patience. The sax rips to the heart of the matter quickly and so effectively that I was left, as a listener, atoning for my own sins. And how about My Baby, with it's perfect spattering of honk and bash over its melody.

With a title like You Have Me Seeing Red one would expect a violent anger fueled tune but he treats it with more disappointed instead, which always cuts deeper. After Dunn's captivating solo, Jones bends and rings out each note as if he was explaining something that you just couldn't understand. The band comes in weaving a map of swells and rumble only to end in a quick burst just as it began.

I would be remiss if I didn't mention the recording of the album. Co-produced by Steven Joerg and Jones himself, the sound of the horn becomes another broken down barrier between player and listener as it is up front in the mix and virtually effect free. This decision requires a heightened confidence that Jones backs up.

The AUM Fidelity web page describes the album as, "Music that has been purposefully designed to embrace the listener." Admittedly, Book of Mae'bul doesn't always reach for the outer atmosphere but it does very effectively sift though the dirt of the human condition, which in my opinion, is equally unexplored. An album that continuously leaves me emotionally exhausted.

A sample of the quartet live and from where Jones drew inspiration for Roosevelt: