Scott DuBois' 'Landscape Scripture' and Joel Harrison's 'Search' were recently released on Sunnyside Records and both showcase their respective leader's guitar playing and compositional skills, however in two very different settings. While it seems that Harrison's compositions are highly detailed charts with a good deal of freedom given to the players, DuBois' seems to let the players define the shape of song. In both cases, there are references to folk, classical and a little bit of rock wrapped in a free/modern jazz approach. 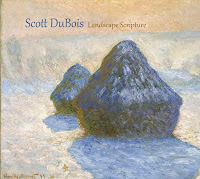 'Spring Haystacks', the opening tune, gets off to a slow and probing start. DuBois' clean-toned reverb-tinged electric guitar delivers a fragmented melody over shadings from Gebhard Ullmann's bass clarinet, while the percussion and bass provide subtle momentum -- subtle at first that is. The song builds at its own pace, then maybe about a minute and a half to the end, all the pieces snap together for the payoff. Ullmann sputters and spits along with DuBois' spare melodic knots. Underneath it all, there is a deep interlocking groove, supported by strong rhythm from Thomas Morgan's bass and Kresten Osgood's drums.

'Prairie Suite' follows, starting out with just the drum and bass about at the same tempo where the last song left off. This time, while DuBois delivers a ephemeral melody, Ullmann comes in strongly on the tenor sax. Tension drives the song and momentum is built in the friction created by the rhythm section's restraint, especially when DuBois comes in with his knotty solo. I almost feel like there are echoes of Abercrombie, DeJohnette and Holland's Gateway at points. The groups interactions are exciting and driving, building up to Ullman's high energy solo, where he employs all sorts of technique to color and energize his crackling lines.

Later songs offer more pastoral and folk like leads, while others delve into free-er territory. Overall, 'Landscape Scripture' packs a lot of energy at opportune times and a good deal of economy overall. It develops slowly with intentional tension and when the energy picks up, it's riveting. 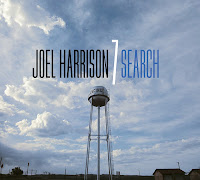 Like on 'Landscape Scripture', the songs on 'Search' are brought to life by the momentum and restraint in the writing and playing. Harrison's compositions and arrangement of all the voices in his septet shows great care and precision. Yet, there is also a certain looseness. For example, this is on display as the space that pianist Gary Versace exploits to great effect on the opening 'Grass Valley and Beyond'. The pianist builds an internal energy that passes onto the next soloist, Donny McCaslin, and subsequently his emotive tone and lines interact fantastically with the rhythm section.

Harrison's compositions provide a strong framework for the soloists to really dig into and all of the songs are interesting and complex creations. The quarter hour 'A Magnificent Death' puts the violinist Christian Howes and cellist Dana Leong to good use. The song deftly runs through several moods and feels, from the classically infused beginning to the uptempo middle section, to the swelling climaxes and the eerie spoken word section. Bassist Stephen Crump's presence is felt throughout and he locks tightly with drummer Dan Weiss in complex rhythms that take on a life of their own.

Leong's cello, which is featured prominently on a reworking of the Allman's 'Whipping Post', is vibrant and aggressive . An arrangement of 20th century composer Olivier Messiaen's 'Oh Sacrum Convivium' is an interesting recasting of the classical work. Harrison, for the most part, lets his musicians have the spotlight, taking some choice solos but mostly playing to serve the compositions.

Both of these recordings are well worth seeking out and available via eMusic, iTunes, and just maybe at your local record store (if you still have one … support them, we need them!)