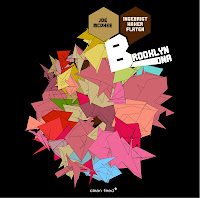 
Two years ago, Joe McPhee and Ingebrigt Håker-Flaten released "Blue Chicago Blues". Like the previous album, everything is likeable and high enjoyable, yet nothing is exceptional either, in the line of what you can expect.

The DNA refers to the jazz genes or sound molecules in Brooklyn's past with the titles of the songs referring to the musicians Sonny Rollins and Dewey Redman who lived there, or jazz clubs like Putnam Central and the Blue Coronet. Both musicians use these genes to reconstruct/improvise highly modern new jazz, with McPhee on sax and pocket trumpet.

On a more personal note, some of my DNA is now also living in Brooklyn in the shape of my son. And on another personal note, the song title "Enoragt Maeckt Haght" is described as Brooklyn's motto coming from the Dutch. It is actually "Eendraght Maeckt Maght", and it indeed means "unity makes strength" in the old spelling and it is the motto of my home country Belgium, a country that is anything but united.

To come back to the music: it's free form, rhythmic, bluesy at times, fun or melancholy, with lots of references to the jazz tradition, and played by two musicians who move alike, often in perfect sync in terms of pacing and coloring, despite the fact that everything is improvised.