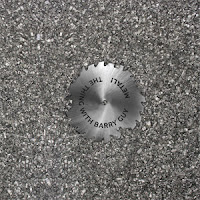 The Thing with Mats Gustafsson is that not everybody in the free music community likes his approach. When Stef reviewed some of his new albums two months ago, one of the comments added that he is just playing “loud and raucous”.

Whether you are a fan or rather reluctant – listen to his new The Thing album. As usual the band is Paal Nilssen-Love on drums, Ingebrigt Håker-Flaten on bass and Gustafsson on saxophones. For this record, which was recorded at St. Catherine’s Church in Vilnius, they are backed up by bass legend Barry Guy who has also played with Gustafsson in the marvelous Tarfala Trio. All pieces on “Metal” except the last one are named after metallic chemical elements, the cover shows a saw blade in the middle of all kind metallic trash. If the more timid of you fear the worst, “Lanthanum”, the opening track of the album, might prove you right. From the very first second everything is displayed like in an exposition of a play: the main motives, the protagonists, Nilssen-Love’s relentless drumming, the two basses struggling, intertwining, pouring fuel into the fire, the musicians cheering each other on and on top of all Gustafsson yelling and howling. Yes, there is sheer brutality - but there is also absolute beauty. The key track on the album is “Europium” where you can find everything the album is about in a nutshell. It begins with Gustafsson’s baritone ticking like a clock, slightly losing its regular rhythm. It takes over a minute before the basses join in and only then the saxophone starts to cry out in an almost bluesy approach anticipating something dark deep down under the surface. Only then, after a short conversation of the two basses underlined by Gustafsson playing almost lyrical notes, Nilssen-Love starts off chasing the saxophone on a first wild ride. There is a break in the middle of the track where Nilssen-Love plays a duet only on the hi-hat with Håker-Flaten who tunes down his bass to infernal depths – it’s the calm before the storm. And then all hell breaks loose, Gustafsson’s baritone is yowling in long deep shivery cries like an animal in fear of dying just to switch to fury from one moment to another as if being ready for a final attack.

But in the end, it all calms down, the ride is over and there is nothing but sadness. At this moment Gustafsson plays a heartbreaking part accompanied by drone-like and scratching basses, here you can find consolation in beauty. The piece (and the whole album) wakes a hundred sleeping memories with free music and makes them ripe and vivid again, remembering especially Albert Ayler and Peter Broetzmann.

The album closes with a cover version of Lightning Bolt’s “Ride the Sky”. It is shorter and less Punk/Metal than the original. But it is incredibly tense and organic due to the atmosphere the church provides. What a way to end an album.

The album is released on double vinyl only and strictly limited. Don’t hesitate.

You can find a sample of the concert here: