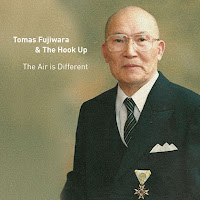 The most striking aspect of Tomas Fujiwara & The Hook Up's 'The Air is Different' is perhaps its fullness. While it is essentially the same quintet that appears on 2010's Actionspeak (Trevor Dunn replaces Danton Boller on bass this time around), the compositions and group interplay seems to be more fully realized on this sophomore outing.

The dual horns of trumpeter Jonathan Finlayson and saxophonist Brian Settles gives the group a lot of musical possibilities as the lead lines often twist and turn around each other, sometimes competing for the same space, other times interacting respectfully or doubling up. Guitarist Mary Halvorson lends some of her signature pitch bends and unique harmonic support, and provides some excellent leads as well, like on the aggressive 'Double Lake, Defined' and the slightly-off-but-still-stately melody of 'Lineage'. Dunn veers expertly between holding down effective grooves and adding touches of color, he compliments Fujiwara's playing terrifically.

The combination of Fujiwara's compositions and musical approach really gives all the players the space and support they need to construct engaging solos. The slowly unfolding 'For Ours' features Settles working in an almost straight ahead jazz mode, with his solo punctuated by the occasional trumpet and guitar hit. Halvorson, utilizing a natural tone, sans-effects or hitting acute tonal clusters, delivers an attractively lyrical solo. 'Cosmopolitan (Rediscovery)' begins tantalizingly with oblique snippets of sound and sonic bursts that build deliciously only to be deftly organized into a delicate melody. Another highlight is the subdued restraint of 'Smoke Breathing Lights', where the group plays with tension and restraint, delivering subdued passages until almost the eight minute mark when band leader pushes the tempo and Finlayson bursts out with a vigorous statement. Throughout, Fujiwara provides a pulse and creates the textures that pulls all the parts together.

'The Air is Different' is an excellent recording from Fujiwara and The Hook Up. The group has developed a strong collective sound and the solos congeal well, blending the spirit and feel of free playing with strong compositions that play to the strengths of the groups confident, organic and melodic sound.