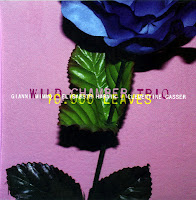 With a dry slap of the tongue and the warble of a Japanese bamboo flute, soprano saxophonist Gianni Mimmo leads the way into “Atomic Heart.” Clementine Gasser’s 5-string cello rustles the leaves, brushing against the pianistic wind chimes of Elisabeth Harnik. We are drawn into a protean soundscape that is brash, lawless, frequently off-putting, but consistently engaging.

Such is the nature of “10.000 Leaves”, the premiere recording from the Wild Chamber Trio, a cross-European meeting of the Italian Mimmo, Swiss Gasser, and Austrian Harnik. This is the freely improvised sound of three great musicians on a 52-minute joyride through the land of jazz energy and classical sonority without a road map.

The idea of playing improvised music in a “chamber” setting dates back to the early 60s, when cool-jazz reed player Jimmy Giuffre stepped further away from convention in the company of the then-young now-legendary Steve Swallow and Paul Bley. Compared to the explosive, confrontational, blues-steeped flights of his more-famous contemporary Ornette Coleman, Giuffre’s drumless music was one of an intimate, boundless, searching dialogue.

Fifty years later, the Vienna-based group continues the conversation. For the duration of the recording, the trio navigates music of considerable variety and surprising originality. All three constituents possess the prerequisite musical skills for high-level free improvisation. They have the musical ears and brains to pick up and instantly expound upon the most abstract statements of their partners, and the physical ability to execute each impulse seamlessly.

The real liberating factor in the group, however, is the huge range of effects the musicians conjure from their actual instruments. The possibilities for new textures expand with each successive track. In “Shade Multiplication,” Mimmo’s soprano wheezes mechanically in and out of unison with the harsh overtones of Gasser’s 5-string. He often blows into the instrument until it distorts and warps like the vision of asphalt on a hot highway.  On “Radiance,” while the cello rumbles ominously and tonelessly, Harnik’s piano strings ping and resonate ethereally against the metal objects placed upon them. Within the blink of an eye, her instrument shifts from temple bells to bone rattle to the strained yowl of scraped cord.

When the trio deals in notes, their dialogues show deep invention and expert cohesion, but when they play with sounds, they attain near-telepathy. The improvisations open with powerful collective statements of atmosphere, such as the scrambling animal footfalls of “Fire Code,” the marshy bubbling and quacking of the title track, the dying fluorescent-light hum of “Remaining Words” and the military stomps, slams, and wordless vocalizing of “Kitty Hawk.” At moments of climax, the ensemble sound is an overwhelmingly rich cacophony. In the recording’s final minutes, it is one of vaguely mumbled questions and scurrying half-heard protests.

“10.000 Leaves” is an exciting debut, a reminder of the vitality of “chamber” improvisation, and a document of masterful free music making.