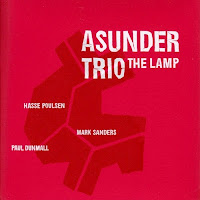 The sax-bass-drum trio is a particularly favorite combination of mine. The flexibility of the unit, the space that is filled by the three instruments and both the power and finesse that it can achieve is inspiring. However, I am also pretty partial to the sax-guitar-drum configuration as well. It's different, the bottom end is more likely to fall to the bass drum, but the canvas of sound in the middle is rife with possibility.  This is exactly there where the Asunder Trio pulls off passages that can coo in your ear and sand blast your face. Single note lines and blurted chords contrast with restraint and melodic intent, it's a trio of musicians who say a lot in their improvisations.

On the first song, Asunder, the guitar builds incredible tension and darkness over which Dunmall delivers some ferocious lines. Mark Sander's percussion rumbles menacingly below, ensuring plenty of momentum. Dunmall's lines entwine and encircle the guitar and drums foundation, twisting and turning endlessly. For the introduction to the second song, The Lamp, Hasse Poulsen's acoustic guitar plays a little more traditional of a role, introducing the song with strained arpeggios and striking syncopations. The drums clatter below and the percussion lends texture rather than a steady rhythm. Dunmall's sax is introduced through a bunch of squeaks and squeals while the tune builds in intensity. The song is an engaging improvisation that follows its own stream of consciousness logic.

The last song, For Tony Levin, is dedicated to the late percussionist with whom Dunmall had a long musical partnership. The song has an amazingly subtle build up and is moody soundscape that has palpable restraint. The tension though is not without reward -- but it's not an ecstatic climax the song reaches, rather it's a feeling of gravity, one that captures the feeling of loss tempered by the joy of making music.

Overall, The Lamp is an effective and affective recording.