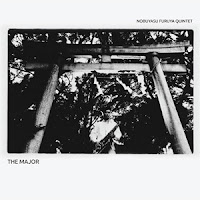 Nobuyasu Furuya has the fire of free jazz burning in his belly. Since his impressive debut as a leader in 2009, he’s had a reputation as a brash, passionate improviser with a sound that invokes the cathartic heat of the original movement. As with any purgative art, self-indulgence is a risk that must be managed in free jazz. Raw emotion may be what is most plainly conveyed through music, but that doesn’t mean that communication is an easy task. It’s a caveat Furuya always keeps in the back of his mind. You only need to be swept into the spiritual jazz surge of “Jap Agitator Caught Again” to realize that he’s tapping into some cosmic nerve, something we all can feel on some level.

Part of Furuya’s success with this music is his close relationship with members of RED Trio, all of whom are present in his quintet. They’ve staked out their own idiosyncratic corner of the piano trio canon, and with trombonist Eduardo Lála, they form the flexible, responsive infrastructure that bolsters Furuya’s fiery vision. But these are free spirits, remember, and if there’s a problem with The Major, it arises when Furuya attempts to orchestrate structure or intensity, forcing things like breaks or crescendos instead of letting them naturally unfold. “D.O.O./Declaration from Detroit” is perhaps the biggest victim of this approach, the kind of semi-coordinated, unsubtle blowfest that reminds me of Zorn’s weaker work, and is normally below these guys. It’s a gamble that does have its pay-offs, however, most notably in the raging, dissonant swagger of “Where are the Brother and Sisters?”, which actually finds drummer Ferrandini and bassist Faustino swinging, and hard.

By the final two cuts, the group has settled in comfortably, the three-part conversation between Furuya, Faustino and Lála at the beginning of “When No Saints Go Marching In” a particular highlight.  As the final track closes on a deep, wavering piano chord, it’s hard to imagine ever growing tired of these musicians. They’ve come to improvised music because they are searching, chasing those fleeting moments when sound converges just so, engulfing and moving you in ways you could never attain otherwise. It’s these moments that join musicians and listeners.  The Major may not be Furuya’s strongest date, but it’s as authentic as anything he’s put to tape.  May he keep the torch burning.

This is another extremely limited LP from NoBusiness. Get it from the label here.

Can be purchased on Instantjazz.