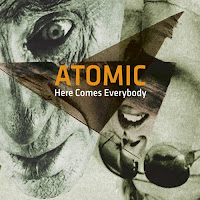 My apologies in advance to all those jazz lovers who subscribe to Derek Bailey's philosophy of music, and I paraphrase; 'If music is recorded, it is already too old', for reviewing another album from late 2011. There are just so many great records being released that sometimes there are not enough hours in a day or year to get to them all. Some albums need mention whether they are the newest release or not. Atomic's Here Comes Everyone is such a record.

But not in a way that I expected.

With a group consisting of Fredrik Ljungkvist (clarinet, tenor, and baritone saxophones), Magnus Broo (trumpet), Harvard Wiik (piano), Ingebrigt Haker Flaten (bass), and Paal Nilssen-Love (drums), you basically have a Scandinavian super group. Individually, they are known as some of the best players and visionaries in their respective fields so it is always amazing when all five members can get together long enough to record an album. I was really looking forward to something akin to the emotions depicted on the album's cover; pleasantly shocked and/or blissfully reflective.

It came in little doses and not waves. The title track, "HCE (Here Comes Everybody)", starts things off with the horns chasing each other up and down the melody. This leads into a soft  piano moment with Wiik but the silence is soon destroyed by Broo as he kills the higher registers with his trumpet. Flaten and Nilssen-Love (his brush work here is astounding) get back to what they do best on "Milano" as they propel the tune to great heights.

There is a real structure to this album amidst all the chaos. Things always work out in the end even though there never seems to be a dominant band leader, and that's a good thing as four of the seven tracks were written by Wiik and the rest by Ljungkvist. There were several subtleties missed on my first listen and my initial rating was a little lower but on the third listen something clicked. It was the tightrope they were walking on, the fine line between cohesiveness and anarchy. The song you don't hear. This is where their true energy comes from. Sometimes the point is not about the song, it's the choices of how it is played. Sometimes the ear is drawn to Nilsson-Love, "Morphemes", sometimes to Wiik, "Unity Toccata", but all giving respect to each other.

Most of the album has the stamp of Ljungkvist. The mellow tone of his sax sings as he mellows out some of Broo's harshness (albeit some of the best work I've heard from him).  "Upflog", for example, really exemplifies Ljungkvist's sound in a rare softer moment. He also contains the rhythm section throughout as they have a tendency to wind each other up.

All in all a very good record. It may have been my heightened anticipation, but I just wish there was more to stick to my ribs.

Watch them do their thing here:

Purchase the album on iTunes or from the label.

Nice review, I feel much the same way but I am starting to get the impression (wrongly, I hope) that Atomic are getting to the point where they are just "going through the motions".
To some extent this is possibly because the band members are all involved in a myriad of other projects.

Yes Allan, I also have to agree on this point. I was tempted to review the album but when listening somehow felt I was listening to a lack lustre version of previous releases. Atomic promised much, but at the moment they (to me) seem to be going in circles.

It's also sad that the early albums are difficult to track down. The Bikini Tapes (as an example) are a must for any self respecting modern jazz fan.

Thanks for your comments.

I agree Bikini Tapes is essential, if expensive, listening -- there is currently one for sale at Amazon France marketplace for EUR 67.99.
Magnus Broo is one of my favourite horn players, check him out with Ingebrigt Haker Flaten in IPA if you have'nt already -- this is how Atomic should be sounding IMHO.

Thanks for the tip Allan. I haven't heard those records, although I've just been looking at the bands 'bandcamp' space ..... looks as though they'll be on my 'to buy' list!

Sorry, it's not a bancamp page but on Ingebrigt Haker Flaten's own website.