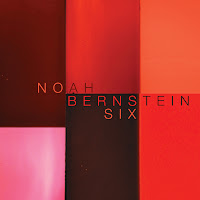 Noah Bernstein has a day job playing sax in the current lineup of tUnE-yArDs.  It’s surely a good gig, but the writer/arranger in him probably needed to make this, his debut recording as a leader.  And I’m just gonna get this out of the way now: It’s one of the most satisfying listens of the year.

The band is a piano-less sextet that functions as a saxophone quartet with bass and drums.  The arrangements seem to be based on the Mingus model of playing written compositions, but with plenty of room for improvisation – by the soloist particularly.  The saxophones play beautiful chords over the incredibly-tight-but-swinging rhythm section, only to leave one sax to solo over the drums and bass line without the harmonic restrictions imposed by chords.  Then after the predetermined number of bars has been played by the free trio, the other 3 saxophones frequently chime in with a composed section that, more often than not, takes the music somewhere else entirely.

Like Mingus, Bernstein’s got one foot in hard bop & the other one in a land free of such creative restrictions.  At one point Eugene Lee (soprano saxophone) plays a solo that begins with some heavy Cannonball-style swinging and ends with the rapid-fire runs of Coltrane running headlong into interstellar space.  Of course, the entire band whacks Lee in the head with a killer chord progression on the next bar.  It’s the same sort of surprise you get around every corner with Naked City, Deerhoof, or Mostly Other People Do The Killing – only the actual flow here is smoother.  This is definitely one of the best tricks up Bernstein’s sleeve.  One of the jaw-droppers happens during the end section of “Jubilee,” where Bernstein brings its lively pace to an abrupt halt by having the horns playing alternating chords of whole notes.  It’s the kind of sudden drop you’re more likely to hear on a RZA production than a jazz disc – and it works like crazy.

Again, the blending of all of these seemingly disparate sounds is mixed so easily that it makes it difficult to describe how a recording could be so seamless and still include moments that sound like a Mingus arrangement of Trane’s interpretation of “My Favorite Things” (“H.E.A.”), a straight homage to the arrangements of Duke & Strayhorn (“DDR Twenty-Six-Sixty-Six”), a klezmer-influenced piece (“Ladders & Trees”), the harmolodic thing in the trio sections throughout, and a meter-free rhythm section going apeshit underneath a gorgeous ballad (“Zara’s Theme).

And I haven’t even mentioned how brilliantly Bernstein resolves his ideas during the improvisational sections!  Go get this thing from Bandcamp asap.  Ten bucks says his next one’s on Firehouse 12.  It’s that good.