Norwegian bassist Ingebrigt Håker Flaten started Tektite Records earlier this year as a vehicle for his solo work, with future plans to release ensemble recordings and the music of other artists. The label’s first two offerings both feature a lone Flaten, one on acoustic bass, the other on electric. 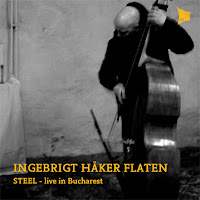 Steel: Live in Bucharest was recorded in Romania at the very end of 2010. Its slight 23 minutes don’t give Flaten much to work with, but he makes good use of the time. “Steel, Part 1” is patient, almost bluesy, as pensive a piece as we’ve heard from Flaten. Each note is resolute, direct. The audience is hushed, their attention clearly captured. The forceful strumming at its close sets the tone for the huge washes of sustained arco playing that comprise the second part, with swells of sound that increase in urgency, only to ebb and then intensify once again.

“Steel, Part 3” is a short, rhythmic exploration of buzzing strings that progresses into the strange, high vibrato phrasings of the final track. Here, Flaten flirts with extremes in volume and sound density, pushing the acoustic bass into its noisiest reaches. As the perennial sideman, it’s interesting to hear Flaten left to his own devices. He’s a player that derives a lot of energy from his peers, and though he can certainly be intense in a solo setting, he seems more inclined toward slowly and carefully developing his ideas. In all, a strong (albeit brief) showing. 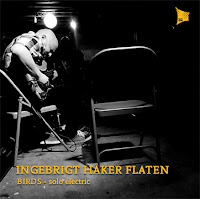 Birds is more difficult. It’s not easy to ascertain what kind of statement is intended with the pieces here. All are in the vein of noise or ambient music, mostly manipulations of sustained tones and feedback using effects pedals. “Exploratory” might be a fair way to describe what’s offered, as each of the six cuts seems to be a testing ground, occupied with a limited palette of textures and ideas. Very little sounds anything like traditional playing, and it often ranges into harshly dissonant, even painful, territory.

Occasionally, Flaten stumbles across some truly interesting effects, such as the muffled fireworks of “Two” or the ghostly, beating pulse of “Lucia.” Birds certainly represents a new facet of Flaten’s musical output, and perhaps one we’ll see him develop more. For now, it’s a document that intrigues at times, but it’s hardly essential.

You can listen to and purchase both releases from the Tektite page on Flaten’s website.