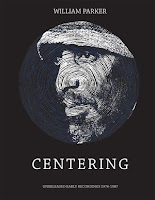 If there is a CD you really want to have, it is this one, a six CD box with unreleased performances by William Parker, redorded between 1976 and 1987, in a variety of line-ups and musical styles. The whole box is accompanied by a 66-page booklet containing lots of pictures, drawings and paintings by Jeff Schlanger and a full explanation by William Parker himself on the performances. In essence, these recordings were planned to be released on Parker's own Centering label in these two decades, but he could not afford it. We can only applaud - again - the No Business label for making this music available.

Disc One brings Parker in two lengthy duets with Daniel Carter on sax. The two pieces are close to half an hour each, and even if they are nice to listen to, they lack the tension and focus that we know from their other collaborations. The last track brings us a trio of William Parker in the company of John Hagen on tenor sax and Arthur Williams on trumpet, a slow and abstract cinematic piece. Again, nice, but not essential.

Disc two brings us the Centering Dance Music Ensemble, with David S. Ware on tenor, William Parker on bass, Denis Charles on drums, a trio that was accompanying Patricia Nicholson's - Parker's wife - dance performance. Accompanying is maybe the wrong word, because the interaction went both ways, with her dancing also influencing the music itself. In any case, you can only hear the music and the trio is great, very boppish and very open. When you think about the energy and lyricism a sax trio can bring, this is about it, with Ware occupying a lot of space, yet also leaving room for solos by Parker and Charles. It is raw, and beautiful and radiates the autheniticity of feeling that you only find in great performances.

Disc three continues the performance of the previous CD, and then proceeds with a duo between the bassist and Charles Gayle on tenor, which is a real treat to hear, fierce and forceful as you can expect, with relentless energy and ideas. The disc ends with two voice-bass duos, with Brenda Bakr, and Ellen Christi respectively, followed by an ensemble with three vocalists - Brenda Bakr, Ellen Christi, and Lisa Sokolov with Parker on bass and Rashid Bakr on drums. Vocal music is not really something I relate to easily (except of Parker's "Raining On The Moon"), so I will not expand too much on it.

Disc four is a mad free-for-all free jazz fest, with all musicians pushing each other forward in an at moments chaotic yet entirely delightful sonic extravaganza, but then one that just never stops, relentlessly, endlessly. And once you think you've heard it all, the band increases the tension, the madness and the hypnotic drive, and you can only remain baffled and overwhelmed by the sheer power and lust for life expressed by this magnificent octet consisting of Jemeel Moondoc on alto sax, Daniel Carter on alto sax, tenor sax, trumpet, cornet, Arthur Williams and Roy Campbell, Jr. on trumpet, William Parker on bass and recitation,  Jay Oliver on bass, and Denis Charles and Rashid Bakr on drums. To be fair, on the last of the three tracks, the music slows down a bit, with musicians taking a step back once in a while, and with the entire band giving Parker himself the place in the spotlight for a long arco improvisation, nicely rounded off by the whole band. This alone is worth the purchase of the box!

Disc five brings us a slightly different band, with Ellen Christi and Lisa Sokolov on vocals, and with Daniel Carter and Jemeel Moondoc on alto sax, Ricardo Strobert on alto sax and flute, David S. Ware on tenor sax, Charles Tyler on baritone, Raphe Malik and Roy Campbell, Jr. on trumpet, Alex Lodico and Masahiko Kono on trombone, William Parker on bass, and Zen Matsuura on drums. Some of the themes are composed, and written in function of the singers, with lots of very open improvisations, linked in a kind of musical suite that gets better and better as it evolves, with moments of grand sweeping themes and beautiful emotional expressivity. If you enjoyed "Double Sunrise Over Neptune", you will like this one too, and to me the best part of the box.

Disc six is again a dance performance piece with the Centering Dance Music Ensemble, featuring Patricia Nicholson's choreography with herself, Susan Kuhn, Leslie Levinson and Kenna Lile as dancers. The band is Rozanne Levine on clarinet, Malik Baraka and John Mingione on trumpet,  Billy Bang and Ramsey Ameen on violin, William Parker on bass and recitation, and with Ellen Christi on vocals. And even if I said that vocals are not really my thing, I must reconsider my opinion, because the way the music is approached here, cautiously, mainly driven by the beautiful clarinet tones of Rozanne Levine and Ellen Christi's ethereal singing, with an incredible sense of pace and space ... is really nothing short of breath-taking. The interweaving of the instruments and voice, creating a nebulous sonic substance, like mist hanging over water. This is the image that came to mind while listening, and interestingly enough, Parker explains that the music was inspired by a picture of light shining through trees at dawn. Not the same visual, but close enough. It is just fabulous.


So, in sum, even if not everything is of the same high level, you get at least some discs that are extremely good, together with a great overview of Parker as a bassist, band leader and composer, including the incredible scope of his musical approaches, from the almost classical dance ensemble to the wildest free moments, yet at no time is it boring : you get energy, intensity, creativity, spirituality, ideas, images, dark moods and uplifting moods, volume and tenderness, raw madness and sophisticated refinement ... deep music, resonating music, and soul ... you get soul in truckloads.

Again, we can only applaud NoBusiness for having brought these recordings back to the world, again in an impeccable total package.

Don't miss it! A must-have for Parker fans.