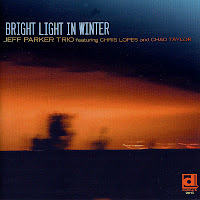 
It's been a long wait for album, the third from Jeff Parker and his trio (if you include the 'Relatives' as a trio + 1). The previous record from 'The Relatives' (as mentioned) was also one very understated piece of work, but something that really stayed under the skin. This record is also another lesson in how to make great music for the guitar without flashing off your chops, playing in 23/16, or inviting some superstar to play on your record.

Jeff Parker has become his own man step-by-step, playing and writing intelligent and forward looking music for guitar. In fact it's his personal approach to the guitar that really makes him so distinctive (naturally), and although I'm sure he has his influences he doesn't seem to wear them on his sleeve. His style could be a sort of modern day Jim Hall, so understated, dry and full yet round, almost old fashioned I would say. Yet his harmonies and approach to his material are quite fascinating. 'Mainz' (tk1) demonstrates from the first notes how Parker's understated style is all about melody and atmosphere, and probably what sets him apart from the mainstream of jazz guitarists. 'Change' (tk3) hovers over a backbeat played on the rim set up by Chad Taylor (drums). The steady beat and pleasing chord melody make room for a beautifully warm solo and also another moment when we get to hear Jeff Parker's impeccable jazz chops. To a certain extent much of the music lies between jazz and rock, but certainly not jazz-rock. The melodies and grooves belong to both worlds and are always catchy and stylish. 'Freakadelic' (tk4) is a moment where we get to hear, what seems like, a sort of free-bop romp where the melody is the improvisation. 'The Morning Of The 5th' (tk5), is a wistful melody without bass as Chris Lopes plays flute, which invokes a feeling past times. Each melody has something which sets it apart from the rest, ballads, quasi Latin groves, acoustic post rock, all bases are touched upon. The final track 'Good Days' reminds you of just how fast things can pass us by.

Finally one could say that Jeff Parker and his trio approach the material in a very organic way, letting each melody tell it's own story, no pyrotechnics. Of course this may not be everybody's 'cup of tea' yet for me Parker really stands way out, someone with a strong vision of his own, making the music original, and naturally recognisable as his thing. This is something which we find rarely in jazz music today, and although this is not a record which blows the top of your head off, it's a record which calmly states it's message.

Highly recommended for fans of the understated!

Can be purchased on Instantjazz.