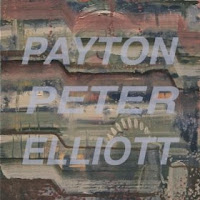 I have found a new jazz electric fence. A record that I can play at home or at the office to guaranty 65 minutes of peace and uninterrupted critical listening time. Age, however, has led me to a better place, a place where I want to share the joys of jazz. On any given day, as I listen to the Payton Peter Elliott album, a lost soul would walk into my office and ask for something. Inevitably, the question is asked; "What is this?" In response, I would pull my chair a little closer to my desk, place my elbows on it and grin while saying.......

"This, my friend, is Payton MacDonald on marimba as well as Elliott Sharp on guitar and Perter Evans on trumpet, three wonders in their respective fields on an album that is totally worth the effort to find. Listen and absorb every last second of it."

I start the album again. The opener, Warm Up Étude, is their study of just that, a warm up. They all start blowing, strumming and hammering in a syncopated rhythm which increases in tempo as they run through their own techniques for getting ready to perform. The exercise increases in intensity until Elliott hits the note that the other two musicians fall into. The tone has been set, they are ready to begin.

The three longer tunes are titled as trio efforts; Paytonpeterelliott 1 (Track 2), 2 (Track 4), and 3 (Track 7). Spread out over the duration of the album, these tracks give each musician a chance to be a part of an ever shifting improvisation. The real treat here is listening to them listen. They give each other plenty of room to explore the various sounds of their instruments whether it be the tone generation of the marimba's lower resisters or the controlled feedback of the guitar or the sputter of the trumpet. And it works. There are moments when I wake up from being transfixed, that I want to start the track over again. The only thing stopping me is the knowledge that something else great is about to follow.

Then there are the solos. On these three tracks, literally named for the player, the focus shifts to the soloist as the remaining pair design the mood for him to play over. On Elliott Solo, (Track 3) Sharp, who has many composer credits under his belt, takes us on a journey that seems focused and determined to get as much out of the listener as he gets sounds from his guitar and amp. He goes from muted tapping to harmonics to full distortion like they were chapters in his tale.

It is during Payton Solo, that I gained my first real appreciation for the way MacDonald plays the marimba. There is a real earthiness that exudes from the instrument's resonance as sticks hit wood. Another great story weaving though the mind and hands of a percussionist who has also written chamber music and music for percussion ensembles.

Peter Evans, on Peter Solo, proves once again that he doesn't need oxygen the way the rest of us humans do. His solo doesn't seem as settled as the other two which allows him to squeeze as many new sounds as possible through his horn. Some of these new explorations need time to stew and he is not afraid to give us that time.

The final track, Cool Down Étude, continues where the opening track left off, finishing the album with the barely audible sound of an amplifier being turned off. Great touch!

Definitely one of the best things I've heard in quite awhile.

I look up and someone else has entered my office. I smile and start the album again.

Can be downloaded through emusic.


Both Payton and Peter together: