Trumpet trios are among my favorite line-ups, but incredibly difficult for the musicians to bring something substantial and meaningful. Don Cherry, Lester Bowie and Roy Campbell were among the first to try it out on record, and with great success. Check out the "Trumpet Trio" tag in the right column to find more of them.

Here are three recent examples that are not to be missed. 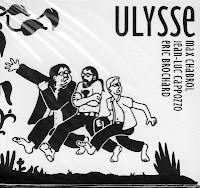 So it is pretty unique to review albums that are not available anymore. Yet on the other hand the quality and the impact of the music is so good, that I cannot leave it just there. Someone needs to pay attention to these three musicians and to their music.

They are Max Chabrol on drums, the initiator of the trio, the youngest musician too, who invited Jean-Luc Cappozzo on trumpet and Eric Brochard on bass to join for this one-time studio recording, of which possibly not more than 100 copies exist.

The music is fully improvised, open-textured, meditative and utterly compelling. Cappozzo plays fully voiced throughout, at times extremely bluesy and melancholy, with Don Cherry and Lester Bowie sounding through once in a while, and when Brochard adds his bowed bass to this, and Chabrol bows his cymbals, the effects are spectacular. No energetic fireworks, but subtle and nuanced impact.

The third track is as dark as it gets, with the bass bowing a mad and slow and repetitive phrase, supporting low and gloomy trumpet tones, with Chabrol adding little percussive effects left and right, creating contrast for the horizantal flow of the two others.  On the next track Brochard adds some Tuvan throat singing to his bowing, making the improvisation sound like a mystic incantation, with Cappozzo's trumpet now playing high-toned souns, reminiscent of Wadada Leo Smith. And then if you think it can't get slower and more eery, you're wrong, because the trio goes even further on the next track, yet ending the performance in more dissonance, surprise and intensity.

And I cannot say "not to be missed", because you can't get it at the moment. Maybe if you send Max Chabrol an email he may be willing to press some additional copies. 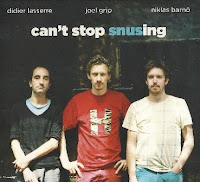 Three years ago, this trio released it's debut album also on Ayler, and I was immediately sold to the concept.

Raw and authentic free improvisation, with three artists carefully co-shaping, not just loose sounds, but coherent instant constructions, spatious and open, with deep emotional resonance, whether in the more sensitive or the more abrasive moments. The trio is Niklas Barnö on trumpet, Joel Grip on bass and Didier Lasserre on drums.

"Admitting" is a fluid piece, "Believing" adds intensity by the weird sonic backdrop created by the rhythm section for Barnö's sad or distressed phrases. "Deciding" is not decisive at all, yet has a strong against-the-grain unpredictable rawness. With "Surrendering", the trio lures us into even weirder territory, with bouncing reactions, swift interactions and a soft yet tense finale. The last track, "Awakening" is the most intense piece of the album, evolving with a stringent necessity of force and expressivity, increasing the volume, and with the rhythm section driving the trumpet forward into ever shorter and powerful blasts. 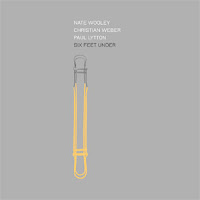 The most intense of the three albums is without a doubt "Six Feet Under", already reviewed earlier on this blog by Daniel Sorrells. The power of this album is not only in the stellar interaction, but the creation of in-the-moment musical innovation is possibly even stronger. What you hear is at times pretty unique, as in the mesmerising ending of the first track, or in the granular juxtaposition of phrases on the second.

The long "La Grande Mort" is the centerpiece of the album, and is again a fascinating example of common creation. Weber's extended tone with his arco bowing and Wooley's circular breathing of a single note set the tone for the rest of the track : this is beyond what you've heard before, and not by using extended techniques, which is often the easy way out for the less talented, but by creating something new full-toned. It is the music itself that speaks, not the sounds.

Here it results in a dark suspense, in line with the album's theme of death. You know death is coming, you don't know in what shape or form, you know you fear it, yet you equally know it's inevitable ... that's the kind of thoughts and feelings that are conjured up by the piece, together with some infinite sadness combined with unpleasantness and dread, only to erupt suddenly in almost joyous tones of liberation, or maybe struggle, and ending in slow resignation.

The last piece is the most inaccessible, closed and hermetic, with distorted sounds and minute intimate in-the-moment  playing, low-volume with little sounds clattering against each other, like the death-throes of a dying animal.

An absolutely superb album by three magicians of their instruments.