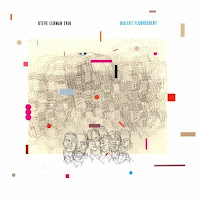 As the history of every art form unfolds, major players fill the dramatic roles that shape its narrative. Jazz has had its ambassadors in Cannonball Adderley and Art Blakey, sorcerers in Miles Davis and Wayne Shorter, acrobats in Art Tatum and George Benson, and poets in Chico Hamilton and Andrew Hill. If Steve Lehman has a part to play in the drama of contemporary jazz, he seems than more than qualified for that of a musical scientist.

In the last few years, Lehman has been pushing the limits of rhythm and tonality in groups ranging from octet to duo. On the new “Dialect Fluorescent” he slides the traditional repertoire and sound of the sax/bass/drums trio under his contemporary microscope. For an old-school LP running time of 45 minutes, Lehman conducts meticulous experiments on four standards and four originals in the company of bassist Matt Brewer and drummer Damion Reid.

The CD begins with a lengthy alto cadenza on Lehman’s own “Allocentric.” Taking a Middle Eastern approach, he slowly develops idea after idea, setting the stage for what will occur in the composition to come. When the trio kicks in, it cycles through a simple pattern of chords that mutates rhythmically each time it’s played. Brewer stays minimal, providing a point of reference while Reid outlines the time with frantic but airtight patterns reminiscent of high-octane electronic music. Lehman performs highly abstract but extremely logical improvisations against this backdrop with his dry, concise alto playing.

The group takes a similar tack on Lehman’s other originals and John Coltrane’s “Moment’s Notice” on which Brewer joins the leader in a drumless duet of extremely complex rhythmic variation. They drive forcefully on when Reid joins with propulsive drums that show as much invention as Lehman’s lead lines.  Coltrane’s familiar melody peeks through only in very small windows, and when it shows up at the end of the song it is remixed, some key notes stretched disproportionately long while others are left alone. “Pure Imagination,” the ballad from “Willy Wonka & The Chocolate Factory” appears in similarly distorted form, this time with dark minor bass drones from Brewer that transform it from sweet to sinister.

The group surprises with swinging renditions of Duke Pearson’s “Jeannine” and Jackie McLean’s “Mr. E.” When the breakbeat drumming and prismatic time refractions of the other tracks are removed, it’s striking how firmly rooted in tradition the musicians seem to be. Lehman’s solos remain daringly distant from the bass notes accompanying them, but they suddenly call to mind the calculated tonal romps of Lee Konitz and the knife-edge interjections of Jackie McLean more strongly than in other contexts. His playing in this manner, though not ground breaking, is highly accomplished and reveals his deep knowledge of and strong respect the innovations that preceded his own.

Demonstrating this affinity in a concert last winter at The Stone, Lehman spoke of how “interesting” and “useful” the material Coltrane and his mentor McLean still are for a contemporary musician.  This choice of adjectives parallels a sometimes-clinical approach that, along with a direct, no-frills alto tone, leaves Lehman open to the same accusations of frigidity that Konitz and other cool-school musicians received half a century before him. The music on “Dialect Fluorescent” certainly isn’t particularly warm-blooded or overtly emotional, but engages with its intellectual invention, verve, and deeply felt sense of groove throughout.

For further information and additinal listening check out this great website: http://destination-out.com/
which promotes more material on Lehman.
Nice and competent review by the way.
Thanks, Steve

Steve is a thoughtful, kind, intelligent, and super cool cat! I've known him for quite a while and love hearing his evolution continue. All props are well deserved for him and his posse.

Yeah. I agree with that. He is surely one of the best. Wish there are more people like him.