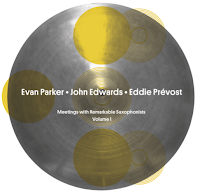 All Told is a clever title. It’s a tidy summation of the nature of free improvisation: in performance, nothing’s hidden—all is there. Usually, recordings allow musicians an opportunity to edit, to tidy up some of life’s “accompanying messiness,” as Eddie Prévost muses. Still, many improvisers don’t drastically edit, do multiple takes, or otherwise attempt to neaten things. In a way, it would defeat the purpose of the undertaking. Freely improvising is about chasing down an ideal, that of the singular musical experience. It can be a painfully fleeting thing, and rough edges and uncertainty are simply part of the chase. So it’s in this spirit of full disclosure that All Told presents a complete performance by Prévost, Evan Parker, and John Edwards. You’d be hard pressed to find many unsure steps here, though.

All Told is a spontaneous performance, but in many ways it’s among the jazziest things these guys have done in a number of years. After a sustained focus on bowed cymbals and small gestures of percussion, it’s nice to hear Prévost behind a full kit again. Where his percussion work is spare, often pregnant with silence, his drumming is busy and (refreshingly) not afraid to swing if need be. In their review of the Parker/Prévost duo Most Materialls, Brian Morton and Richard Cook note how strongly Coltrane is evoked. The same is true here. Parker sticks solely to tenor, working with well-spaced sonic parcels, skittering packets of notes that seem to ricochet unpredictably off everything they meet. Like Coltrane, Parker deals in density of sound rather than individual notes, a harmonic atmosphere that’s difficult to parse but endlessly fascinating.

Edwards, as usual, is brain-numbingly good. There’s a primal physicality to his bass playing that clearly enlivens his playing mates. A working bassist extraordinaire, hopefully someday he’ll receive the accolades he deserves for the legacy he’s been humbly crafting. Occasionally the venue seems to swallow some of the finer details of his playing, but there’s a direct line in his energy that refuses to be obscured.

As the subtitle reveals, All Told is to be the first in a series of albums, all captured from an on-going concert series started by Prévost last year. Parker is the benchmark for remarkable saxophonists in this day and age, and the natural starting point. We’ve been fortunate to share in countless “meetings” with these musicians over the years (though the infrequency with which these three have played together is baffling), and any excuse to bring great talents together is obviously welcome. Keep calling your meetings, Eddie. All Told sets the bar high. But somehow, I don’t think that will be a problem.