Martin Brandlmayr/Werner Dafeldecker/Christian Fennesz: Till the Old World's Blown up and a New One is Created (m=minimal, 2012) **** 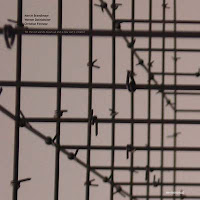 When David Sylvian released his Manafon album in 2009 there were conflicting reactions by parts of his fans. Some were willing to follow him on his new way, others turned their back on him angrily. They published fierce comments accusing him and his collaborators as “pathetic pimp artists” making “nonsense noise”, calling it “off-putting” because he was jamming a wedge between him and his listeners. The record was called “unlistenable” because the musicians were unable to write a proper song or a decent melody. Even worse, they blamed them being “unprofessional” which obviously had to be the result of “extreme depression”.  People who played such music had to be insane and should see a shrink. It reminded me of the abuses the folk hardliners hurled at Dylan when he got involved with The Band and went electric.

Two of the participants on Manafon were Werner Dafeldecker (bass, tapes, computer) and Christian Fennesz (guitars, computer) who are joined on this record by Martin Brandlmayr (drums, percussion, piano, vibraphone, computer) forming an Austrian supergroup of sound explorers. For this album the trio started with each of the musicians composing his own piece of music as a result of long improvised sessions. These pieces were dissected again, reduced to their cores and then used to form new nuclei for another composition – the one we have here. What sounds completely weird in the beginning has brought forth awesome results. You are listening to a minimal reductionist symphony consisting of guitar arpeggios, bass notes standing lonely in the sonic desert, warped loops, vibraphone attacks, fragments of motifs, complete silence, prepared piano elements, parts that reminds you of the noise when you open a steel factory door, metal scraping on metal, wood knocking on wood, clicks, crackles, strumming etc. Hardly ever have I heard something so poetic, something so natural (even if lots of the sounds are computer generated). On the one hand the music is swelling, reduced and condensed, on the other hand it is falling apart dissolving into fragments of an almost pleasant nothingness.

The title of the album is the idea behind the music: You can listen to a world that is blown up (or decaying) while another one is being created. And here you realize that the working method the trio has chosen makes perfect sense. You create a piece of work, before you work on it again, partly destroying it to create something new.

It seems obvious to listen to this music late at night, but it will not serve a pathetic end and lull you to sweet dreams. It deserves concentrated listening, actually you should play it really loud so that you are able to recognize even the most silent sounds. Only then will you notice the wide emotional range it conveys, the strong impact it will make on you, the beauty of the stillness, the wonderful interaction of the musicians, the actual heaviness of the time being created.

This music is highly listenable, artistic, professional, prolific, it is the result of musicians listening to each other knowing exactly what they do. You must be ignorant if you don’t see the beauty in it.
“Till the old world's blown up and a new one is created” has been on the market as a CD since 2009, the vinyl release and the download have now been released by the Berlin based label m=minimal.

You can listen to an excerpt here: