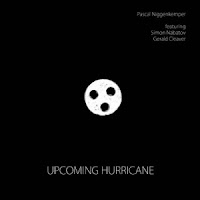 One of the great things of having more people to review all the albums that land on Stef’s desk is that less great music falls through the cracks. This is what nearly happened to one of my favorite 2011 records, Pascal Niggenkemper’s “Upcoming Hurricane”. Here Niggenkemper, one of the most virtuosic and promising bass players of the younger improv generation, is joined by Simon Nabatov on piano and Gerald Cleaver on drums and together they have created one of the most fascinating piano trio albums I have heard in the last few years.

In the end “Upcoming Hurricane” is a marvelous album about the wind as a creative and destructive force. It begins with “Pusteblume” (the German word for dandelion clock), which sounds like a swarm of bees on a summer meadow.  Niggenkemper is developing the track with an arco introduction accompanied by Cleaver just using his brush, the atmosphere is peaceful and quiet until Nabatov enters the scene. He is playing inside the piano and the whole sound changes immediately, he drops the notes like spots – there is still a summer breeze but it announces something dark.

And this is about to happen in the title track. Obviously a gloomy danger is on the way, Nabatov is playing clusters in the low registers (and he will hardly leave them during the entire piece) and Niggenkemper is supporting him while Cleaver is being jolty and spurring on at the same time. The album has been compared to “Money Jungle”, the seminal album by Ellington, Mingus and Roach. But especially this track reminds me more of Cecil Taylor’s Feel Trio as to improvisation, profoundness, ingenuity, and vision. It is the central piece of the album, it is impulsive, powerful and energetic, often close to the edge of falling apart (but of course it never does).

The next track “Arbol de Piedra” (Stone Tree) refers to a natural miracle in Bolivia where the wind has created a strange rock formation. Compared to the preceding track it is completely lyrical, actually lovely and charming with a recurring piano theme, as if nature was recovering from the hurricane. But the image is deceptive, dissonant piano sounds contradict the idyllic scenery.

“Aeolus” (the god of winds in Greek mythology) clearly uses composed elements, with Nabatov playing a theme he takes on at the end of the track. The group takes off for a wild ride here representing all different aspects of the wind - swirling, dancing, ripping, menacing. While this is clearly Nabatov’s track (with a lot of Taylor reminiscences again), “Fighting the Mill” belongs to Niggenkemper. At first the track follows a similar structure as “Pusteblume” starting with a mumbling bass before the others fall in transforming it into a massive natural monolith. It changes its structure every now and then, moving in different directions, hitting the listener with immensely heavy piano clusters, growling angrily in guttural fashion. The final track, “Mongolfière”, refers to the inventors of hot-air balloons and tells us about man’s adventure with the wind when he uses it to fly, in these days a rather anxious, albeit fascinating ride on the element. Again you can hear the Feel Trio - and you are listening to a brilliant unit, there is perfect interaction, freedom, and vitality.

Pascal Niggenkemper said that playing together with Nabatov and Cleaver was “a step to free myself up and to give the listener something that can't be measured or evaluated, with no pre-thoughts or compositions or grids. I need to go beyond that. This is a record that follows intuition.” The music speaks for itself.

The album is available as a CD and an LP (limited edition of 300). You can buy it at instantjazz.com or from the label (nobusinessrecords.com).