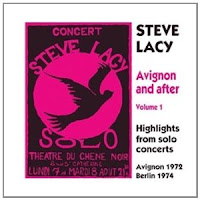 I should start off this review with a confession: I have a difficult time with (non-piano) solo recordings.  It’s not that I don’t appreciate the technical mastery involved with these records; sometimes there is no better way to discover what a musician is capable of outside of a solo context, where one’s command of an instrument is integral to the success of the recording.  It’s that these efforts don’t always grab me emotionally.  The element of dialogue that I’ve always found fundamental to the best jazz and improvised music is obviously lacking in this setting.  Consequently, it’s the range of ideas offered by the musician (in addition to the aforementioned technical prowess) that seems to separate out the best of this genre from the less impressive releases.  Well, I certainly can’t fault this newly-released re-packaged compilation of Steve Lacy’s earliest solo recordings for being short on ideas.  There is a remarkable diversity of sounds, patterns, and techniques on display in these 17 tracks, and there’s more than enough in each of them to sustain one’s attention and interest.  Lacy had a lot to say during this period, and his adventurous yet melodically-rooted approach to these recordings is a testament to his creativity and his longstanding legacy on soprano saxophone.

The first eight tracks were previously released on Emanem’s Weal and Woe (1973), and were recorded at Avignon in 1972.  Each tends to follow a similar structure: a melodic theme is introduced, followed by a deconstruction of that melody during which Lacy teases out a remarkable assortment of squeals, bleats, growls, calls, and chirps from his instrument, before wrapping up with a re-statement of the tune.  Lacy’s technical mastery is striking: whether it involves cascading runs of notes, harsh overblowing, or intervallic leaps, Lacy is in full control of his instrument, and he knows exactly what he’s doing on each cut.  And while this is a challenging record, as Lacy’s more “out” moments on these tracks can be very jarring to listen to, his playful melodic sensibility typically shines through.  A number of the tracks—“Original New Duck” and “Weal,” for instance—reveal Lacy’s well-known Monk influences, as their spry, jaunty melodies serve as access-points to his off-kilter explorations.  And on the second track, “Stations,” Lacy makes use of a radio backdrop in tracing out his excursions, ultimately culminating in a whimsical “I Feel Pretty” reference toward the end.

The last nine tracks include four previously unreleased tracks from Lacy’s ’72 solo concerts, along with solo performances of his five-song “Clangs” cycle from 1974, previously released only in group formats.  For the most part, these tracks are in keeping with the approach of the Weal and Woe recordings, as Lacy’s melodic stance alternates, sometimes dramatically, with his outward adventures toward the less accessible sides of his playing.  The repeated juxtaposition of both sides of Lacy’s musical persona is what gives these tracks their distinctive power.

So even though this isn’t the kind of recording I’m usually inclined to pick out of the pile for sheer enjoyment, I can say that as a historic document of a master of the soprano sax during a crucial period of his development, this is top-flight stuff, and it comes highly recommended.