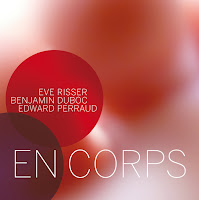 Bassist Benjamin Duboc and drummer Edward Perraud have been featured before on this blog, both are among the most adventurous and technically skilled musicians on the French free music scene. Listening to them is by itself always a treat, and now they are joined by Eve Risser on piano. Eve Risser?

Risser was unknown to me, but what a revelation! Her piano-playing is anything but conventional, highly percussive, full of muted strings, extended techniques, and repetitive phrases. By itself this is not unusual, yet propulsed forward by Duboc's frenetic bass and Perraud's insane drumming, her playing even outdoes the rhythm section in intensity, while at the same time remaining incredibly focused on just a few things, repetition and gradual build-up of the tension.

Like so much great music, paradox lies at the heart of things. The image that comes to mind is one of restrained abandon, of suppressed madness, of controlled exuberance.

It is of a physicality that is unusual in piano trios, while at the same time full of refinement. It starts hesitatingly, with weird sounds growing organically out of three instruments, with quiet deliberation and sense of purpose, eery and compelling, gradually picking up momentum, and then it hits hard, relentlessly, but with a sense of direction and coherence that are uncanny. This is also because all three musicians move as one, to push this sensitive juggernaut forward, without breaks, without pauzes, on the first track for more than thirty minutes, and still it is too short. The second track starts slower, but quickly picks up the same inevitable dynamic, with hypnotic repetition and Perraud's drumming full of counter-currents and Duboc's bass mesmerising. And Risser? She is playing muted sounds, full sounds, scraping sounds, with marbles rolling, strings resonating harplike, single strings being plucked, chords resounding in break-neck speed alternation or all together while maintaining this mad pulse, this crazy speed, this insane movement.

Pure magic! The album of the year.

If you think you know what a piano trio sounds like, think again ...