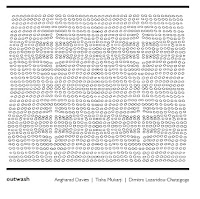 Lately I’ve been reading Seth Kim-Cohen’s excellent book In the Blink of an Ear, which argues that post-Cagean sound art has been short-changed by an unwavering adherence to Pierre Schaeffer’s “sound-in-itself” approach, and that the discourse surrounding the sonic arts should more appropriately be placed within a larger social, philosophical, and political context.  Another Timbre is a label that seems to be heading in the “expanded” direction that Kim-Cohen advocates. They’ve released countless above-average recordings, most in the quiet, detail-oriented vein of modern free improvisation. A lot of this music shares characteristics with the “EAI” genre, but it is often much more than that, thoughtful music that it would be unfair to pigeonhole into one arbitrary subgenre or another. Outwash continues in this tradition.

There’s a cool, late-night atmosphere to Outwash, something fragile about its constitution, like the careful formation of icicles. And perhaps ice lends the right idea: “Outwash”–as well as the glacier-themed track titles themselves—are perfectly suited to the music within, slow fingers of sound that seem to reach out tentatively from something big and still just outside of earshot or awareness. Violin, piano, and zither both make the music and don’t, so far removed are they from typically safe musical deployments. Davies’ violin is a sparse but crucial component, a presence that never really dominates the music but would leave an enormous void if it were missing.  Lazaridou-Chatzigoga is reminiscent of Davies’ brother Rhodri in many ways: she approaches the zither much as he does the harp, plying unnatural sonorities from the instrument using objects on the strings or e-bows. Both seep around the murky din of Mukarji’s prepared piano, its hollow resonances ringing like struck pillars of ice.

In an interview on the label website, Mukarji likens the music to full sentences, as opposed to the clipped punctuation or phrases of some improvisation. It’s a metaphor that ties in nicely with Lazaridou-Chatzigoga’s Ph.D. in theoretical linguistics and her interest in how we glean meaning from combinations of signs and symbols. But in what at first seems a strange turn, Mukarji later states that music “should never hold a message.” Maybe in the context of Lazaridou-Chatzigoga’s day job this is true—it takes a whole different realm of semantics to address Outwash. But a lack of some linguistic message doesn’t equate to a lack of meaning, and this is where Mr. Schaeffer gets tossed out the window: music may not be a language, but it’s also not just sound and sound alone. There’s something rich and meaningful and wildly difficult to articulate about improvised music; maybe some warm and revealing thing about our humanity that we understand at the gut level. We feel these convergences of sound to be rife with meaning, that they are inextricably entwined in our webs of culture and experience.

Cold as this glacial music may be, these three ladies have truly conjured that ineffable, soul-warming something, and Outwash is one of the most captivating records of the year.

Listen to an extract from “Moraine” here: