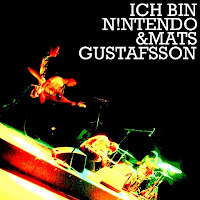 Like many Germans I am a soccer fan. And I was just watching my favorite club being beaten by its “worst” enemy. It was not a simple defeat, it was humiliation – and I watched it until the bitter end. After that I needed something really strong – something like Ich bin N!ntendo feat. Mats Gustafsson.

You need the following ingredients:
Preparation:
Take the basic ingredients (guitar, bass, drums, sax), chop them apart and mash them in a food processor. Then pop and empty a bottle of water. Fill the bottle with the basic ingredients, the Beefheart blues and heavy rock riffs, the sliced psychedelia. After that shove the staccato punk drumming, the distortion sounds, the thudding bass, and the Zappa/Brötzmann/Hendrix  ingredients inside the bottle, too. Last but not least you have to stand the whole explosive mixture carefully in the Lasse Marhaug mix and mastering freezer and leave it for about half an hour so everything freezes around the bottle. Then take it out of the freezer and shake it thoroughly.

It tastes a bit like Original Silence, Naked City or Evan Parker/John Wiese, if you need any references.

I gulped down a good mouthful to swallow down the pain my favorite club’s defeat left in my throat and immediately felt better. But you can enjoy this mixture just for fun as well. It’s a killer!