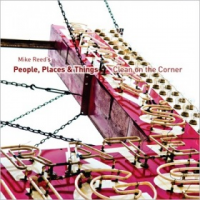 Sometimes it's daunting going into the Free Jazz Blog files to see what's in there, and what needs reviewing! In fact everything should be reviewed but there just isn't enough time in the day to do that. So often I find myself hitting the play button on something and hoping it's what I'm looking for on that day.


Mike Reed's album caught my eye as something that would be easy to listen to and a possible respite from some of the more overtly 'intellectual' releases that I get to hear. Mike Reed - a drummer composer - has written some very attractive pieces that his group gets to work with and develop in a pleasing manner, but with a few sneaky twists that keep these excellent musicians on their toes. The music which is very melodic in content has plenty of tempo changes, rubato sections, free excursions and solo passages that allow each player to deliver some wonderful solos. The music does have some more collective type improvisations but in general it's music which wants swings like the clappers.

Tim Halderman (tenor sax) has a slight Dewey Redman feel to his style, switching between more free-bopish lines to slightly more sound orientated ideas. In comparison alto player Greg Ward tends more towards a strict post-bop vein, often nearly blowing the lid of the tunes with some fireworks. Tunes such as 'The lady has a bomb' and 'Sharon' (which has Craig Taborn guesting) fly past with great speed and have some excellent solos from all, not surprising really as the themes are all melodic pieces that fire inspiration, and must be much fun to play upon.


There are a few tunes which step outside the strait-ahead such as the wonderful 'December', 'Where the story ends' and a fine ballad 'House of three smiles'. These tunes are finely worked pieces that look much further into the possibilities of the group working as a unit or have a more introspective side to them, such as 'House of three smiles' which also features the playing of Josh Berman. It's a shame (for me) that there weren't more pieces as these on the recording. 'December' uses a delicate melody to support a free dialog between bassist Jason Roebke and Mike Reed. 'Where the story ends' uses a strolling type melody which reminds me of some of Ornette's ballads. The two horn players build some interesting solos that look into various corners, melodic and non melodic, whilst the bass and drum create the relevant colours. The other tunes on the record tend more towards the mainstream, and although the music is fun to listen to, there's no real surprises. I also wonder why the two guests have been added. To my ears it seems the group works fine as a unit without the help of outsiders.


And so it is, a joyous bouncy album that verges on the realms of post-bop but actually keeps one step outside of the mainstream. Probably an album for anyone interested in good hard swinging music with a modern twist to it. Also a group that is probably very much fun to see live!

You can buy the album from instantjazz.com