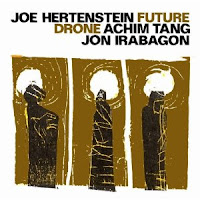 There clearly is more than one Jon Irabagon, the tenor saxophonist who played on albums with sounds as different as "Foxy", "I Hear Nothing But The Blues", "Mostly Other People Do The Killing", "RIDD Quartet", or his own somewhat too ambitious "Outright". On top of this, he also recently collaborated on Mary Halvorson's "Bending Bridges".

Here he plays in a trio led by German drummer Joe Hertenstein, and with Achim Tang on bass. The album is very much a trio achievement too, one of free improvisation, with the exception of two tracks. The entire album is dedicated to Paul Motian.

What you get is still entirely different from what you can expect. The music is intimate, raw, fresh, creative, with a range that goes from cautious explorations - of which some are truly magnificent - over some hard intensity to the soulful moments of "Ballad For Paul and Poo", yet all tracks form one very coherent and varied whole.

The intimacy is equalled by the intensity of the playing, which has a sense of supressed urgency, or controlled   expressivity, which never actually explodes but remains full of expectations and held-back anticipation. The result is incredibly crisp and emotional. It hurts and it comforts.