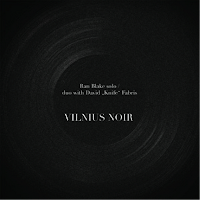 Ran Blake has had an abundantly prolific career as a quirky, idiosyncratic, and cerebral pianist who offers performances that are consistently thoughtful and refined, yet with occasional twists of suspense or wry humor that just manage to prevent the listener from getting too comfortable.  He’s made some terrific recordings over several decades of work; more recently, his solo outing from 2006 (All That Is Tied) was a real gem of a disc, and it showcased Blake’s undeniable originality and still-vibrant creativity at the ripe old age of 70.

On this recording Blake is teamed up with David “Knife” Fabris, with whom Blake has worked previously on a couple of discs on the Hatology label (Silver Noir; Something to Live For).  Significantly, the two musicians only play together on half of the tracks; and on one of those (“Driftwood”), Fabris and Blake each take half the tune, making the song essentially two solos placed back-to-back rather than a joint endeavor.  This is unfortunate, since Blake and Fabris clearly have a strong rapport, developing moments of interesting synergy on cuts like the opening “Vilna/Turning Point,” which offers some mysterious musings from both players in a very noir-ish vein, in keeping with the central theme of the disc.  The same can be said of their brief treatment of “Mood Indigo” to close the record, where Blake and Fabris offer a delicately counterbalanced study of the Ellington classic.  But with this interplay a factor on only half of the cuts on the record, the other tracks stand or fall as solo efforts from each artist.

And when it comes to the solo tracks, here Blake gets the better of Fabris by a considerable margin.  Blake is his usual self here, offering consistently interesting and every-so-slightly off-kilter renderings of everything from a melancholy traditional Jewish folk tune (“Shlof mayn kind”) to the jaunty and slightly more upbeat “In pursuit” to a very Blake-worthy interpretation of Stevie Wonder’s “My Cherie Amour.”  Even though Blake has offered more dynamic range and stylistic variation on other discs, and his playing here tends to be somewhat more restrained and less adventurous overall, there’s still a consistency to the quality of his playing that repays repeated listens.  Unfortunately, the same can’t always be said for Fabris, who’s not Blake’s equal when it comes to being able to hold his own as a solo performer.  His sound has a very bluesy, expansive, and open feel to it, which is rather compelling in itself.  But on the tracks he’s given here Fabris doesn’t always develop his ideas fully, offering brief patterns and phrases that don’t really go anywhere.  While he establishes an intriguing groove on “Driftwood,” his solo doesn’t do enough to sustain interest; the overall effect is of a pleasant, yet ultimately unsatisfying exploration of the tune that gradually tapers off, at which point Blake comes in with one of his patented chordal exclamations, paving the way for him to close out the tune with more authority than Fabris is able to muster during his portion of the track.

There are moments on this disc with real promise and potential, to be sure; but the recording’s fragmented quality results in its having a bit of an identity crisis.  As a full duo disc, it might have been much stronger on the whole.


You can buy the album from instantjazz.com