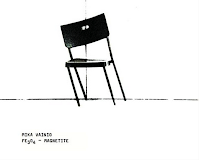 Last March, I attended a Mika Vainio live set. It wasn’t the first time I had the chance to experience a performance by this half of the now in permanent hiatus famous experimental electronic duo Pan Sonic. So I was certainly aware of the many-sided embodiments of the artist, swinging from deep techno to minimalism. However, the misleading promotion of the hosting club had me thinking it was a live presentation of his recent work on Editions Mego, called “Life … It Eats You Up”, that we can mainly file as a great “processed guitar” record.

How naïve of me knowing the reputation of the club! Instead, I spent the night at kind of rave party. At two o’clock a.m., after uncountable hours of clearly out of synch breakbeats gently provided by the DJs opening, the happening - despite the three PowerBooks they were proudly showing (how is that even possible?) - and just before my legs gave out (I’m not that young anymore), Vainio finally appeared on the stage.

Basically I was happy because someone was respecting some rhythmic basic rules playing just two turntables, and considering that Vainio is indeed a competent musician, I even managed to appreciate some pretty minimalistic passages while I was trying to ignore the screams and shouts of the infamous audience gathered there for the night.

Apparently the flyer wasn’t misleading for them, so probably it was just my friend Bartolo’s fault for he had convinced me that we should not miss such an important electronic event.

The seven compositions of “fe3O4 – Magnetite” don’t add much to the Nordic master's repertoire. Distorted layers and obscure whistles, all the bursts and melodic structures are skillfully built and the result is pleasurable. The quality of clicks and cuts is far above the average of the genre. Vainio excels in the hyper bass tones. The bells and their resonance in “Magnetosome” are remarkable. Basically every sound in the work is interesting and exactly where you expect it should be. Even if on the whole I consider the formerly quoted “Life … It Eats You Up” as a more sincere and inspired work.

Because I have no fear of contradictions, this is probably not jazz. Nevertheless this is a good album with serious and well-done music.

Buy and listen to some at the label.