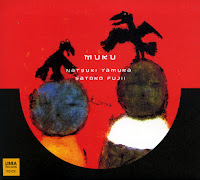 Regular readers know my appreciation for Satoko Fujii and Natsuki Tamura, not only wife and husband, but also musical soulmates, playing together on most of their incredibly prolific oeuvre. This albums is their fifth duo album, after "How Many" (1997), "Clouds" (2002), "In Krakow In November" (2006), "Chun" (2008).

Although the "musical soulmate" concept is bizarre in their situation, because of their totally different approaches to music. Fujii is incredibly innovative, dramatic, abstract, expansive and angular. Tamura's music is more intimate, melodic and melancholy (that is, when he's not totally 'out there' with his other industrial noise approach). On this album, they lean more towards Tamura's softer personality, also because most of the compositions are his, as performed earlier with Gato Libre, his chamber quartet that is founded on European urban street music.

On this album we get the unbelievably sad "Dune And Star" from "Shiro", the playful "In Barcelona, In June", and the melancholy "In Paris, In February" from "Nomad", and the waltzing "Patrol" from "Kuro", fo which the melody will keep playing in your head for hours to come.

This is gentle music, and even when Tamura's trumpet once in a while goes into grunting and blowing and farting, his tone is usually very warm and even classical as much as jazz. And so is Fujii, demonstrating her broad piano-playing skills that also span widely across genres and styles, using many of them as if genres basically do not exist, just music. And like Tamura, her gentle playing luckily also has sharp claws that can tear some anticipated patterns to shreds. 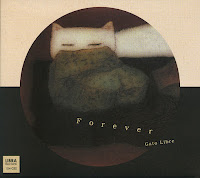 The bands soft melancholy touch of European traditions, with a little eastern mystery added to it, sounds recognisable and simple and sweet at the same time. Luckily that's only how it sounds, because the technical skills of all four musicians are excellent, so are the compositions and improvisations. The end result is that this is again an album that you play many times without tiring of its warm intimacy, that luckily keeps away from cheap sentiments. This is a great chamber quartet. I wonder what will happen with the band without Koreyasu's contribution.