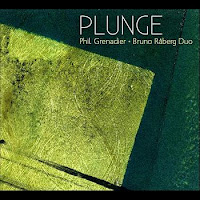 Trumpeter Phil Grenadier and bassist Bruno Råberg offer us a nice and intimate duo performance. Over nineteen, mostly short tracks, both musicians explore the space between sound and emotion, then reworked by Råberg in his studio, which offers a higher density at times than you might expect from a duet.

The use of effects were limited to the studio environment, and not by the use of extended techniques at all. Despite the overall improvisational nature of the album, the sound is very accessible, gentle and clean.

The centerpiece of the album, and also the longest track, is Ornette Coleman's "Lonely Woman", in my opinion one of the best compositions ever because of its inherent conflict of sadness and hope. The shortness of the other pieces give us just snippets of approaches, and before the tone is set, the tune is stopped, without any chance for development and exploration. This may give the impression that substance is missing, but in reality that is luckily not the case, primarily because of the coherence of the tracks.

The deep feeling of the blues presented with abstract zen-like simplicity.


Listen and buy from CDBaby.

Since I'm on the topic of "Lonely Woman", here are some more recent albums that carry Coleman's signature theme. 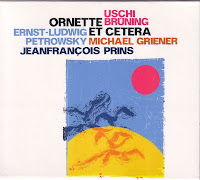 A jazz quartet with Uschi Brüning on vocals, Ernst-Ludwig Petrowsky on alto, clarinet and flute, Michael Griener on drums and Jean-François Prins on guitar. The quartet brings a number of Coleman compositions, including "Lonely Woman". All well-played, though nothing exceptional. 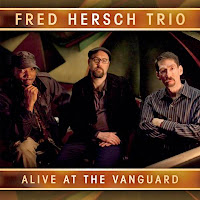 A beautiful trio of Fred Hersch on piano, John Hébert: on bass, and Eric McPherson on drums. Nothing spectacular, apart from the excellent musicianship and Hersch's ability to turn compositions inside out, showing new angles without destroying the original concept. In this way, he interestingly fuses Coleman's "Lonely Woman" with Miles Davis' "Nardis". Probably not adventurous enough for the readers of this blog, yet worth mentioning.