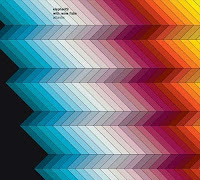 A few weeks ago I caught up with some slightly older releases, finally getting to Elephant9's 2011 release Live at the BBC. Upon posting, I had no idea that this new studio album was dropping, and like a sudden blast of refreshing Nordic air, the latest Elephant9 made an unexpected and most welcome arrival.

However, before I go any further, I cannot help but ask the question: How can you make a good thing, like Live at the BBC, even better?

It seems that if you're Elephant9 and have had a good run of albums mining the early canon of jazz-rock, notably Weather Report and Bitches Brew era Miles Davis, the answer, it seems, is by adding Swedish guitarist Reine Fiske to the mix and amping up the intensity.

'Black Hole' kicks off the album with a short staccato burst of percussion and then a full bodily plunge into driving rhythm and heavy Hammond organ. It seems to a signal a new darker and more powerful musical attitude. A tense energy builds in the tunes, leveling the ground around them and building a new coruscating landscape.

When it comes to the added guitarist, Fiske is as much a texturist as a soloist. He's shaping sounds, he's blending into and thickening the melodies and harmonies, and he's adding arching solo passages. Even on the more ephemeral atmosphere of the introduction to 'The Riddler' and the title track 'Atlantis', he blends seamlessly with Ståle Storløkken's keyboards, coloring and accentuating. His guitar has quickly become an integral voice in the group.

Overall, the sound of this recording seems a bit heavier and at the same time bit more spacious than the earlier two albums, which was a direction hinted at on the live album. Nikolai Eilertsen's bass lines and Torstein Lofthus' drum work are as solid as ever and Storløkken's keyboards cover a huge sonic range. Well into prog-rock territory but still deeply rooted in jazz improvisation, the songs are not so much mind-blowing intricately assembled odd-metered vignettes, but bedrock for the textures and improvisations on top. Atlantis is a welcome addition to the Elephant9 discography.