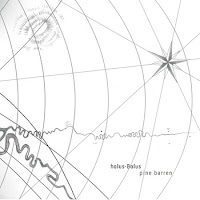 
When I first heard about the album, Pine Barrens, I was intrigued. A press release came out indicating that Holus Bolus leader, woodwind player and composer Josh Sinton, would be releasing the album on his own via his website. I decided to follow the albums' release, but soon found the experience a little tricky. So, I'm quite happy that he also released through the internet only label Prom Night, because otherwise, attributable only to my own need of having the whole album, artwork and all, in my possession, I could have missed out on this excellent and idiosyncratic album.


Working with Sinton is cast of NYC based musicians that have often graced the pages of the Free Jazz Blog: Jon Irabagon on alto, tenor and sopranino saxes, Mike Pride on drums and vibraphone, Jonathan Goldberger on guitar and Peter Bitnec on bass. Sinton plays baritone sax, and bass clarinet. The group's interplay and the contrasts between the two woodwind instruments in the compositions are really attractive.


Pine Barrens begins softly with "Through the Trees I Saw Stone Caves on a Beach I". Built primarily from repetitive motifs, it is a minimalist tone poem invoking the feelings of faded and poignant memories. In fact, the imagery of the tunes are explained in essays about the music which appear on Sinton's website. In the writings, he relates how the music references periods of his life between growing up in the Pine Barrens of New Jersey, family vacations in California, and deeper familial relationships.

The second song, "Water for my Father" takes on a more ominous tone. Working with legato phrases and darker hues, the sonic imagery deepens. Sinton's bass clarinet and Irabagon's sax interplay is perfect and leads seamlessly to the primal scream that develops towards the end of the song. 'Deeper in the Woods Than You' begins as a sort of post-bop/avant-rock song, and it's where we begin to get a taste of Goldberger's guitar work. Creating textures behind the tension building head, he bursts forth with a quick solo that effectively reference bop, rock and skronk at the same time. It's not all turmoil however, 'My Clarinet Teacher' offers a great solo over counterpoint between the guitar and bass clarinet. 'Star Fuckers' is a deliciously spacious and diffuse tune that reminded of certain early fusion excursions.


The recording is an unusual mix of styles and it works together in an unusual way. I'm happy to have this album land in whole in my MP3 player. It's quite worth a listen: