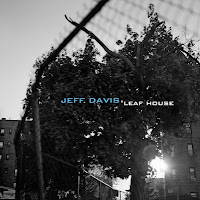 I was so excited to see another Jeff Davis recording especially after enjoying his last outing as leader 'We Sleep Outside' so much. A quick scan of the players cemented my hunch that this recording was going to be very different from his last. In this incarnation, he has done away with the saxophone, guitar, trumpet and Kris Davis steps away from the piano stool and is replaced with Russ Lossing.

'Leaf House' delivers a dense, complicated and literate vision from Davis. It reminds me of getting home in rush hour traffic or what I envision cutting through rough jungle with a machete would be like. It is specific and unrelenting. The musicians gathered here are up for the task of manifesting it and in most cases adding to this trio.

Russ Lossing's playing is like listening to Einstein improv sing in the shower. I may not understand everything he says but there is an assumption that it is brilliant. Eivind Opsvik (bass) not only guides Lossing and Davis (drums) into some form of continuity, but is also responsible for mixing the album. He lets the bass swim in a wading pool of reverb. In sacrificing some of the crispness, he allows the instrument to get absorbed into the overall sound as if to fuel the other two, taking whenever needed. Davis composed all of the 8 tracks on 'Leaf House' and plays with charisma and composure, leading and listening, a stately combination.

Track one, 'Leaf House', starts with a pounding percussive line by Lossing and when the rhythm section enters, it turns into a trudging march with lots of room for Lossing to break out and continue pounding the keys on his piano.

Track two, 'Faded', comes at you from all angles. Davis starts with deceptively mellow brushes but quickly changes without drawing any attention. If you can get around the seemingly random angles that Lossing constantly hits you with, and allow yourself to piece together his puzzle, you will find that deep under his fingernails lies a beautiful and meticulously constructed melody. It's rather hypnotic.

The remainder of the album keeps you in its grasp until it lets you go some 53 minutes later. It ends with 'Lion Mouth' which gives Opsvik his chance to contribute to the grand design with a focused and thoughtful solo of his own.

If it was Davis' intent to challenge the listener with a deep dark record, then his mission was successful. He has also produced an album that will shine bright from his discography for years to come.

A little sample of the opening track:


x
Can be purchased from the label.