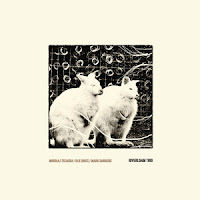 “Riverloam” is such an evocative word. It makes me think of fungi on a riverbank, colorful mushrooms pushing up through black earth, tiny bright surrogates that hide the true extent of the knotted mycelium whose countless nerve-like connections stretch in all directions just below the surface. Maybe this is a decent metaphor for Riverloam Trio, too—and all improvised music—this idea that perhaps what we’re hearing is the dense, unseen mycelium, the untraceable web of connections that binds musicians on a stage or in a studio. Some vital thing that’s bigger and more deeply rooted than the bodies we see standing before us.

Plus, there’s Mikołaj Trzaska’s rough-hewn, earthy tones. Trzaskahas been an important voice in the modern Polish scene since the early 90s. In recent years, he’s branched out significantly, playing with a number of international musicians and releasing improvised music on his label, Kilogram Records. Here he teams up with two Londoners: bassist Olie Brice and the ubiquitous drummer Mark Sanders. Riverloam Trio features five long improvisations that stretch across two LPs. Trzaska trades off between his woozy alto wail and some quieter, brooding bass clarinet work, clearly inspired by his rhythm section.

And inspiring it is. Sanders can make anyone sound good, and Brice plays in an almost vertical manner, seemingly building his ideas upward rather than simply laying them out. There’s a wonderful logic to his lines, even in heated exchanges. “Ostrich Season” gives him a central role, his bass thundering through the low simmer of Trzaska’s clarinet. There’s a clear rapport among the trio, and Trzaska and Brice in particular aren’t afraid to circle back on an idea if it seems there’s something more to be extracted.

Riverloam Trio is one of those great albums that feels like it was made for vinyl. The playing keeps pace with the best of the modern crowd, but there’s something aching in Trzaska’s vibrato—even from the first moments of “Riverloam”—that hearkens to the early days of this music, that almost necessitates the physicality of handling a record, the ritual of flipping wax and setting needles. A time when maybe we were a little more emotionally connected to music, because the act of listening was a bit more purposeful than overloaded iPods and hard drives allow.

As can be said of many NoBusiness releases, Riverloam Trio is worth the investment. It’s the fire music of our time—maybe now more like glowing embers, but still remembering something of the flames that gave rise to them.