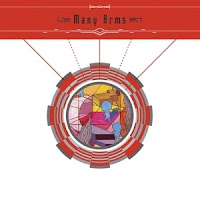 Many Arms do sound like many arms at times but in fact there are only six. Two belong to bassist Johnny DeBlase, two more are in the shoulders of drummer Ricardo Lagomasino, and the final two are home to guitarist Nick Millevol's fingers. This is the third album from this American trio and their first on Tzadik, with each member contributes one suite each to this three track recording.

Track 1, "Beyond Territories", strikes me as what Newton's first law of motion would sound like; a track not unlike hitting a golf ball on the moon. There is no friction interfering with the motion of this track and if it weren't for the restraints of the recording medium or a producer, this track may have continued forever. From its drum rolls and guitar licks and the bass keeping it all together, there really is a feeling of perpetual motion going on here. It stitches together repetitive segments until you just about can't take anymore and then it blasts into a wonderful free jazz affair.

"In Dealing with the Laws of Physics on Planet Earth", does, ironically, fit firmly into Earth's laws of potential and kinetic energy in continuing with an unintentional theme. This trebuchet of a track gets loaded and starts its slow winding to maximize the energy in the counterweight by using guitar and bass runs with feedback before the drums start the propulsion. It takes many arms indeed to wind the wheels on this one. Then thirteen and a half minutes in, after some very deliberate string picking and an ever increasing tempo, the concrete ball is triggered sending it straight into the air. The only shame is that you know it's coming and results in no great surprise.

The final track, "Rising Artifacts in a Five-Point Field", continues in an 'objects in motion stay in motion' until acted upon by a Lagomasino drum solo. This track starts like any good free jazz number should, full of direction and confidence, with everyone listening and yelling at the same time with some serious funk on the bass. Then the drums bash through the wall that stopped the strings in their tracks. This is a great drum solo break indeed, and completely unexpected as everything had been a complete group effort to this point, very welcome, but unexpected.

I did like this record on the third listen more than the second and much more than the first and am looking forward to the next. I also realized that I need to brush up on my grade school physics.

Watch them here. Can be purchased from the label.