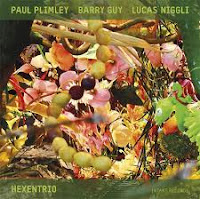 There’s a track on Hexentrio called “Witches in Our Fingers.” After listening to the trio at work, it’s a phrase that would actually explain a lot. Barry Guy has a long history of mystifying listeners with his warp-speed improvising, bass playing that, despite its pace and abstraction, is still so musical and compulsively listenable that few things short of black magic seem adequate to explain it. Pianist Paul Plimley and drummer Lucas Niggli also share in Guy’s preternatural gifts, and the three conjure a prickly, lively sort of improvisation that’s apt to get some new synapses firing.

Guy has paired off with Niggli and Plimley for years now, and the three first formed a trio together in 2010. Hexentrio was cut in the studio during their European tour earlier this year, a collection of seventeen short, busy pieces that showcase an overabundance of energy and ideas. Both Plimley and Guy are known for their work with large ensembles that blur the lines between composition and improvisation, and there’s an air of that approach to Hexentrio, too. Figuring out which is which in the frenzied activity is anyone’s guess, though.

Despite the racket of tracks like “Flo Vi Ru” and the aforementioned “Witches,” these three have been playing long enough to know that not everything needs to be shouted, and in that spirit Hexentrio sports some quieter pieces, too, like the lilting “Passport (Expired)” or the melancholy “Arcdesedo.” It’s all enjoyable stuff, with the only misstep being the weird vocal improv of “Come and Go.” The track goes on about twice as long as it needs to, but is forgivable when taken in the fuller context provided by the two brisk tracks that book-end it.

The “hexen” in the album’s name is an ambiguous coinage, as it’s unclear whether these three are the ones casting spells or if they themselves are the victims of some dark curse. Either way, it makes for exciting music. Loud or soft, cluttered or sparse, Hexentrio is a stimulating listen. It’s worth giving a shot; everyone could use a good brain-kneading now and then.