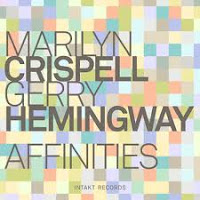 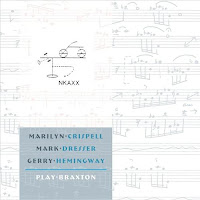 Anthony Braxton's 1980s quartet is arguably his finest small ensemble and is undoubtedly his most well known group.  The interplay between the members of the band was nothing short of miraculous during its few short years of existence; and its reputation has (rightly) become legendary.  So when the listener hears the opening few minutes of “Shear Shift,” from the new Crispell/Hemingway set of piano/percussion improvisations, he will be teased by Crispell's arhythmical single-finger jabs, playing elliptical figures while Hemingway begins to swing like Max Roach, then suddenly breaks the rhythm apart, plays with the tempo, and then returns to the relaxed pulse.  He does this repeatedly underneath Crispell's gradually increasing notation, which eventually morphs into huge banging chords.  Without warning the piece slows to a gorgeous end.  The question of “Do they still have it?” remains unanswered – at least on this first listen – leaving a second question in its wake: “What the hell was that?”

Of course, nobody expects this to be easy listening – and from these two, we know going in that the only thing we can expect is the unexpected.  That said, the next track is a piano/vibes avant-lullaby that wouldn't sound at all out of place on a horror film soundtrack.  The one that follows, “Starlings,” features a vibes & treated piano duet that sounds like two aliens (and birds are aliens of sorts) having a conversation that gets more excited as it progresses.  By this point, the listener will know that not only do Crispell and Hemingway still have it, but that their rapport has matured into communication which takes place on some mysterious celestial realm.

Ever imagined John Bonham playing with Cecil Taylor?  Me neither, but a close approximation exists on “Threadings”.  So telepathic is the conversation between the two musicians that it sounds like one person talking to herself on “Air”.  “Permeations” revisits the parade-like impressionism that Braxton loves so much.  In closing the disc, Crispell plays the insides of the piano on a track that is slow, spacious and majestic, leaving a trace of an imagined Nino Rota score lingering in the air.

Enter Mark Dresser on the trio disc of Braxton material.  This is the closest you're likely to get to that golden era and if you're anything like me, you're gonna try to not get your hopes up too much because any disappointment from these folks could make you question all of existence.  But even on familiar material, surprises abound.  After ONE minute of classic parade impressionism on “Composition 116,” a jerky anti-rhythm appears (precisely between 1:20 and 1:50) sounding uncannily like DNA circa 1980.  Seriously, tell me you don't hear Arto Lindsay on the piano!

“Composition 23C” is a minuet of sharp, startling beauty and precision.  The classic unison melody model played by Crispell and Dresser is accompanied by Hemingway's brushes in a way that makes the years melt away.    “Compositions 108C/110/69Q” features some great solo breaks, first by Dresser w/ Hemingway later dropping in with a post-bop groove before Crispell comes in playing unison lines with Dresser – and then her own solo steals the show with positively sublime presence.  The interplay between the musicians here is hair-raising, as is the rumbling ensemble flip-out during “Composition 69B (8.2)”.  “Composition 40N/40B” gradually builds into a hard bop-type swing with Crispell taking an extended solo that, I think, defines her playing: melodically angular, logically terse, and emotionally fierce.  It's a moment of intellectual brilliance combined with smoldering emotional intensity, just like the best moments from the composer who inspired it.