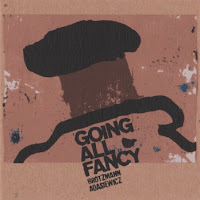 
Right now I am totally excited and enthusiastic. I just saw Peter Brötzmann performing solo in the vaulted cellars at the Center for Jewish Studies under Heidelberg’s old quarter. The room created a special reverberating sound, as if a giant was standing in the back of the location with his mouth open echoing Brötzmann’s notes. The concert was dedicated to John Tchicai, who passed away two days before, and you could feel that Brötzmann was touched by his death.

After the concert there was a merchandising table, which is where I bought this album that Brötzmann sells at live gigs and via eremite only. Now I am on my way home and I am listening to it, it is a perfect extension of the live experience I just had.

Brötzmann has recorded hundreds of albums but he has never released a duo with a vibraphonist before, so even for him this is something really new. Jason Adasiewicz (vib) provides him with a great variety of sound carpets to walk over. On the one hand his vibraphone can sound like musical glasses, which reminds you of an imaginary music of the planets. However, Adasiewicz can also play fragments of rock or techno trance riffs or he can make this instrument sound like steel strings (I know it sounds weird, but it is true). In general there is a strange beauty to his playing as if you were standing behind a waterfall of single notes. When he is soloing you can also hear the influence of Asian music, children’s lullabies and – of course – Milt Jackson.

And Brötzmann sounds as if he was swimming in a fountain of youth. “Going All Fancy” and Swinging to the Leaf” are free jazz services, Brötzmann cries out his desperation and anger to heaven about what is wrong in this world, waiting for the clouds to open up giving him whatever kind of sign – even if he knows that it is futile. “Left Luggage” is the typical mournful blues, there is an ultimate, deep sadness to it at the beginning. Later it gets so tense that you can hardly stand it, but then he lets out the Albert Ayler beast.

The whole album is an acoustic antagonism: the world is beautiful, there is pantheism, even man has created wonderful things, but the social and economic circumstances under which we live make you furious.

It is late at night in the meantime. I am looking back at the concert, being glad that I could live to see something like this. The stars are out tonight, winter is coming … I am looking forward to it, listening to Brötzmann/Adasiewicz.

Get an impression of the music here:

You can buy it from the label: eremite.com

I'm listening now to the sample on the eremite site. This is indeed some lovely music. How does Peter Brötzmann keep producing so much music of such quality, year after year? A truly wonderful musician.

Thanks for pointing me towards this album, definitely one of my favorites from 2012.