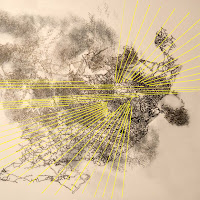 “I didn’t know you were into tribal stuff now …” This is what my wife told me peeping into the room where I was listening to the record mentioned above. Actually, she’s not properly my wife, but we live together and we share a lovely kid. What I don’t want to share with her is my record collection.

There was in any case some truth in her remark. Reading from Eli Keszler’s website we learn about this release what follows. Catching Net is a two-disc collection of selected installations and compositions the artist created during the last two years. It includes both stand-alone recordings of the installations and the integrated ensemble scores performed in conjunction with those. We find, on disc one, two ensemble versions of Cold Pin, a superb percussion composition resulting from a technological installation that had been previously released on vinyl in 2011, plus a 26 minutes long excursus given by the mix of several live ensemble recordings of such a work. To be more accurate, the installation going under the name of Cold Pin features 14 strings and piano wires of various lengths strung and stretched along a wall and struck (I imagine maybe with different intensity) by micro-controlled motorized beaters. Come on! Help me please and watch this video!


The result is a self sufficient musical universe that can be enhanced by the live performance of a varying ensemble that numbers, in this case, Eli Keszler on drums, percussion, crotales and guitar, Ashley Paul on alto saxophone and bass harp,  Geoff Mullen on prepared guitar,  Greg Kelley on trumpet,  Reuben Son on bassoon and Benny Nelson on cello.

Especially the long live act gives us back all the sound gradations and the stylistic undertones that constitute Keszler’s musical vision and approach. Percussive clusters, jarring resonances, scraped cymbals emitting drilling whistles and harmonically complex tones interact and merge in an archaic maelstrom of paths to follows in the dark, bursts of light, death and life. My involvement during the listening is more epidermal than aural. That’s why in some way I understood the definition of “tribal”. This music is timeless and boundless to me. I can imagine it playing both as an hidden soundtrack during the rush hour on a NYC subway and as a far echo coming from a bonfire in the Gobi desert at night. It’s tribal because it sounds as our lives sound. It’s tribal because it has the urgency and unavoidability of the mechanism of life itself.

The second part of the work begins with Catching Net, a 17 minute score for string quartet and piano performed by pianist Sakiko Mori and the Providence String Quartet to be played in conjunction with the Cold Pin installation. Then we find two recordings of Keszler’s large-scale installations functioning on their own. One is a solo version of Cold Pin without live performers. The other is Collecting Basin which features piano strings/wires splayed from a water tower in Louisiana across two large empty basins acting as amplifiers for the installation. Imagine a drunk and immense double bass playing a stunning perpetual low chord. I’m the kind of person who can be motionless and enraptured for hours “seeing” live such a sound.

Packaging offers besides an extensive selection of images and sketches of the installations, program notes, electronic schematics from the projects and drawings by the artist himself.

This is what Keszler’s music also makes me think. As John Cage reported more than once in his writings, when you enter in an anechoic chamber - a specially designed room to stop and absorb reflections of either sounds or electromagnetic waves both from inner or exterior sources - you will not find in any case total silence. You are going instead to hear two different noises. First is a low uninterrupted tone. That’s the flux of your blood. Second is a sharp recurring pitch. That’s your nervous system at work. We could summarize saying that sound is inside you, something you cannot completely get rid of. Something that has always been there, that you can maybe cut out of your attention but that sooner or later will emerge to take a coherent shape. In my opinion this is what happen as well in the Eli Keszler’s music conception.

I was about to give a five stars rating, but this is in any case a collection of already released stuff. So, I promise that the missing half star will be added to the next, I’m sure even more challenging, Keszler’s release. Per aspera ad astra

I was there overflowing while thinking this thoughts when I felt the need to listen to Mats Gustafsson “Needs!” album.

“Is our washing machine broken?” She came and asked. I will not marry her.

Listen if you want.