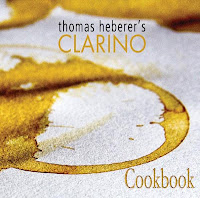 Last year I was really impressed by Thomas Heberer's Clarino's debut album "Klippe", with the leader on trumpet and quartertone trumpet, Joachim Badenhorst on clarinets and Pascal Niggenkemper on bass.

Badenhorst and Niggenkemper got acquainted with Heberer's own notation system for composed improvisation, and now that the effort was made, and the first hurdle taken, why not explore further. It was rather a story of enthusiasm : the collaboration and the end result worked so well that Heberer composed some more pieces for the trio. And the result is even more staggeringly beautiful.

The setting is intimate, calm chamber-jazz, with instruments that play mostly in their usual voicings, making the overall sound very accessible. Yet, in contrast to most chamber music, all three musicians are quite expansive emotionally, pushing their sounds in expressions of deep feelings. And then there are the compositions. Each track has its own concept and returning phrases, echoes and counterpoints, as ingredients with which the tune is played. To the credit of the both composer and musicians, the ingredients are light and sparse and used to give their full flavour rather than a complex broth of conflicting tastes.

The end result is extremely beautiful, with songs to be moved, to wonder at, to be surprised, to be impressed.

At the same time it eludes definition, it defies classification or even references, which is one of the reasons why it took me so long to review it. I've been listening to the album with pleasure and repeated anticipation for months, trying to find ways to capture its essence in words. It just doesn't work. It's not possible. So apologies for that. I can only recommend that you listen to it for yourself.

You can listen to some excerpts on Heberer's website.