I thoroughly enjoy orchestral music, big bands, symphonic adventures and daring arrangements, but I sometimes wonder, how do you pull off balancing writing and arranging with the spontaneity and subtle interactions found in smaller ensembles?

To present an entirely non-scientific and inconclusive answer, I offer two case studies, the 30 piece ratchet orchestra from Montreal and the sprawling Sonic Liberation Front from Philadelphia. 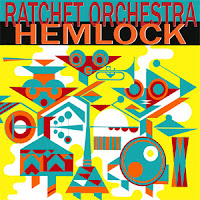 According to a short bio, Canada's Ratchet Orchestra leader Nicolas Caloia has for over 20 years, "worked at creating a contemporary music generated by using accurately composed textures to channel collective improvisation."

If the guitar break about a quarter of the way into 'Dusty' can be used as illustration, Caloia succeeds astoundingly well. From a prickly drip of melodic snippets to a full on skronk, joined by other woodwind voices, to some classic Fender Rhodes comping, the delicate orchestration that kick off the album ('Winnow') give way to a full bodied group improvization. This is followed by the thoroughly composed and orchestrated snippet 'Yield', which is kind of fun light classical-pastiche. And so on through different approaches and styles, like 'Wish-Part 1' which is a avant-fusiony gem. While my attention drifted a tad towards the end, the closing 'Hemlock 2' snapped me back to attention.

There is a great deal of variety on Hemlock. It is thoughtfully constructed and there are moments of inspiration and spontaneity throughout. The group here is: 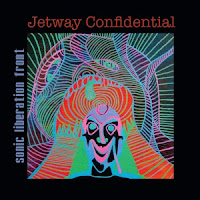 The Sonic Liberation Front seems like a collective. The inside fold of the CD has a color coded chart of who plays what on each track, but even without a key to unlocking thier sonic puzzle, you'll be quite entertained with the music. Citing the work of Sun Ra as a main inspiration, the group uses the celestial band leader as a jumping off point.

There is enough percussion and poly rhythms to satisfy ('uh uh') There is chanting and singing mixed in with the fractured grooves and tonal textures  ('Mother of 9') , some rather spacious and sweeping pieces ('Jetway Confidential #3 - for Sun Ra') and towards the later part of the disc some strong Afro-Cuban inspired pieces featuring some atmospheric intertwining of the guitar, woodwind and other horns ('Umami').

An album with a lot going on, requiring repeat listening and a willingness to just go where it will take you. The musicians:


So, do I answer my original question? Honestly, I'm not sure. Elements of composition and free playing are approached here in two very different ways, from the quiet sonic constructions of Hemlock to the Afro-Cuban stylistics of Jetway Confidential, all I can definitively say is that there is indeed a lot of room under the free jazz tent and the music is fantastic