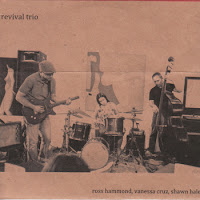 Consider me a fan of Ross Hammond's earthy tone and free but 'composed' approach. I first heard the Californian guitarist when I had a chance to review the free-jazz-rock  Adored this past winter. This new release, which is a document of a recent but now dormant project, The Revival Trio finds Hammond exploring African music, but still well within the aforementioned jazz-rock -- or maybe even jazz/folk-rock -- framework.

As Hammond explains, the impetus of the project was simply a desire to explore "African-influenced improv music -- a’la Abdullah Ibrahim, Ali and Vieux Farka Toure, Boubacar Traore and a few others." This combined with his own accessible and organic approach makes for an enjoyable aesthetic, which can sort of be described as a more muscular approach to the style that Bill Frisell touched on with his Intercontinentals.

Starting with the tune 'Ali' where a repetitive rhythmic line gives way to a powerful improvised melody, to the building intensity of "Littlepants" and "All Our Dogs", this group demonstrates its adeptness with African styles, while staying true to their own musical approach. Bassist Shawn Hale and drummer Vanessa Cruz are integral to the interweaving of the sinewy melodies and flowing rhythms.

Overall, the recording isn't quite as varied as Adored, but it is a compelling and quite satisfying listen. It's exciting to hear how musically adventurous this trio was, and while this group may not exist any longer, I'm sure something else will spring up in its place, perhaps building on the groundwork laid.